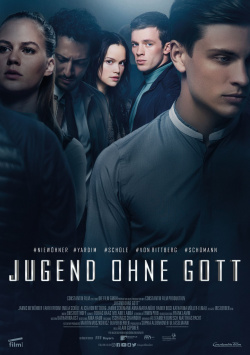 In the not too distant future, people will only be judged by their performance. Those who are unable to provide these services are pushed to the margins of society. In a camp in the mountains, the students of a graduating class should prove whether they belong to the best and are accepted into one of the highly sought-after places at an elite university, or whether they are denied a life of prosperity. One of the participants is the loner Zach (Jannis Niewöhner), who attracts the interest of his classmate Nadesh (Alicia von Rittberg) with his reserved manner. But when the girl watches Zach meet an outcast (Emilia Schüle) in the woods, this could mean the end of the program for Zach - and maybe the end for Nadesh, too. Soon the events turn up, until the situation threatens to escalate in the camp…

80 years ago the Hungarian writer Ödön von Horváth published the "Youth without God", in which he dealt with the development of fascism in Germany. This film adaptation by Alain Gsponer ("Heidi", "Das wahre Leben") has only certain motives in common with the original novel. The screenwriters Alex Buresch and Matthias Pacht have transformed these into an atmospheric dystopia that not only critically examines our performance-oriented society, but also addresses issues such as the loss of privacy, constant surveillance or the ever-widening gap between rich and poor. The story is told several times, again and again from different perspectives. Thus the truth slowly sits down like a puzzle for the viewer. Even though some scenes repeat themselves, there is never any boredom.

Besides the cleverly constructed narrative the movie lives from an oppressive, yet somehow also fascinating atmosphere. It is precisely the discrepancy between the slightly futuristic-looking images in the city, shot in Frankfurt among other places, and the scenes in the rough mountain landscape that create a very captivating atmosphere. This is also positively supported by the good play of the actors. Especially Anna Maria Mühe and Fahri Yardim, who plays extremely cool and finally shows that he can't only do comedies, manage to leave a lasting impression.

Sicherlich, some elements of the story seem a bit overdrawn and are very clichéd. and also at the end there are some justified points of criticism. But all in all "Youth without God" is an extremely exciting and first-class staged youth drama, which not only entertains well, but also inspires reflection. Even though the Holzhammer method is used for this at times, the positive aspects of the movie are so strong at the end that there is a clear "absolutely worth seeing"!