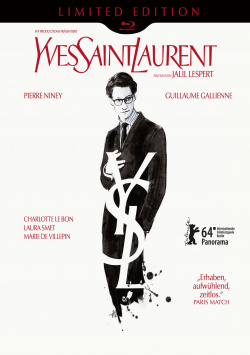 Film: At just 21 years of age, Yves Saint Laurent (Pierre Niney) was already one of France's best young designers in 1957. As Christian Dior's right-hand man, he seemed to have already achieved everything that a young artist can achieve. But when Dior died and Yves became the artistic director of the prestigious fashion brand, it was the beginning of a truly unique success story, the first chapter of which was written during a fashion show where Yves and Pierre Bergé (Guillaume Gallienne) met. The two become an unbeatable couple not only privately but also professionally. After three years, their collaboration culminated in the separation from Dior and the founding of their own fashion label "Yves Saint Laurent". But over the years the young fashion designer's penchant for perfection has always taken on self-destructive traits, which not only affect his creativity but also his relationship with Pierre. But even his inner demons can no longer stop the revolution that Yves Saint Laurent started in the fashion world.

With "Yves Saint Laurent" director Jalil Lespert sets a monument worthy in many respects to one of the most important fashion designers of all time. With Pierre Niney ("LOL", "It Boy") Lespert has found an outstanding leading actor who transports the various facets of this torn artistic personality to the canvas. Nineys Yves Saint Laurent is once an intimidated young man, who is extremely uncomfortable with the admiration he receives and who prefers to hide behind his designs. Then again he is a capricious eccentric who doesn't realize how much he hurts the feelings of the people who love him. Nineys game changes fast from charming and warm to cool and unapproachable. It is not an idealized version of the fashion designer, but rather the moving portrait of an ingenious spirit that repeatedly stood in his way.

"Yves Saint Laurent" not only portrays the artist and his long-standing relationship with Pierre Bergé, whom Guillaume Gallienne ("Asterix & Obelix - On Her Majesty's behalf") portrays as a very reserved, down-to-earth counterpart to Yves. The film also pays tribute to the work of the fashion designer, the success story of the label and the fashion world of the late 50s and 60s. Therefore, there should be at least a certain interest in fashion in order to fully enjoy this very nobly filmed biopic. There's no question that Lespert has staged a technically very good film, which is also very convincing from an acting point of view. But it is also a fact that viewers who have little to do with Haute Coture might get a little bored here and there.

In addition, "Yves Saint Laurent" also suffers from the common biopic problem that a relatively comprehensive period of time is dealt with here in a relatively short time. As a result, some aspects of the story are somewhat superficial, while others are given enough or even too much time. The intensive interaction of Pierre Niney and Guillaume Galliene compensates for some of the resulting weaknesses. Nevertheless, at the end there remains the feeling that the last act in particular could have taken a bit more dramaturgical fine-tuning. However, even though the movie isn't as perfectly tailored as the noble robes from YSL, it still offers enough well-done aspects to not have to be sold off. So for all lovers of French dramas, noble fashion and strongly played biopics, there is one clear thing: Worth seeing!

Picture + sound: The absolutely clean picture on the DVD has a very atmospheric color scheme, which not only accentuates the harmonious equipment, but also the creations of Yves Saint Laurent very well. The image sharpness is also on a very good level, whereby especially in the bright scenes even the smallest details are well recognizable. The sound is rather reserved according to the film and concentrates on the powerful reproduction of the dialogues. However, music, ambient noise and smaller sound effects also bring a little bit of life to the surround range again and again. Good!

Extras: The bonus material of the Blu-ray is very informative and worth seeing. We start with a featurette in which designer and drawing coach Audrey Secnazi and Violetta Sanchez, former model of Yves Saint Laurent, talk about their memories of the fashion designer and their involvement in the film (approx. 5:42 min.). Then there will be a visit to the Pierre Bergé Foundation, the Yves Saint Laurent Foundation (approx. 6:56 min.), followed by nine detailed interviews, including the real Pierre Bergé (approx. 80 min.), a nice Making of (approx. 13:33 min.) and a Berlinale Special with interviews from the Red Carpet (approx. 14:52 min.). The trailer for the film rounds off the additional offer.

Fazit: "Yves Saint Laurent" lives from its interesting story and from the intensive interplay of Pierre Niney and Guillaume Galliene, which loosely balances out some small superficialities in the staging. The Blu-ray presents the film in very good picture and sound quality and also offers very interesting and worth seeing bonus material. Not only for fashion lovers, but also for lovers of first-class biopics absolutely recommendable!