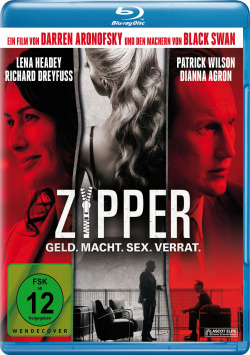 Contents: Actually the charismatic public prosecutor Sam Ellis (Patrick Wilson) has everything one could wish for: he has an attractive wife (Lena Headey) who supports him in all matters, and also his professional career is heading for a real flight of fancy. And yet Sam feels like he's missing something. When he meets a luxury callgirl (Alexandra Breckenridge), it gives him exactly the kick that he needed for total fulfillment. Although he knows he's putting his marriage and career at risk, he can't stop meeting professionals in hotels. But then the FBI lifts the escort ring and Sam threatens to get blown. And he wants to prevent that at all costs, as he is about to rise to the US Senate…

"Zipper" is a successful mixture of political drama and erotic thriller spiced with a slight touch of satire. Patrick Wilson is perfect as a supposedly clean man who, having tasted the forbidden fruit, reveals his true abysses. All the ideals which he still represented at the beginning are more and more trampled underfoot by him with every further meeting with a call girl. How much he loses his basic moral values becomes apparent at the latest in the scene in which he tries to convince one of the girls that she keeps her mouth shut and doesn't reveal anything about her meeting together. At first you get the impression that Sam shows something like remorse and pity for the girl. Because beyond the fancy hotel room she reveals the rather sad side of her job to him and it seems that Sam is emotionally moved by it. But then it comes to a turn, which destroys this impression abruptly.

And it is precisely this merciless way of showing moral hypocrisy, hypocrisy and obsession that makes the film so successful. Especially the last shot makes sure that the movie can convey its message enormously effectively and doesn't submit to the inevitable change for the better, which such movies in Hollywood like to submit to. Because "Zipper" is not about accusing prostitution - neither prostitutes nor clients. Rather, it is about bigotry, hunger for power and hidden obsessions. And this becomes all too clear in the figure of Sam Ellis.

Wilson's game is absolutely convincing in all its facets. Especially his first meeting with a luxury call girl makes this clear. At first he is the total gentleman, is almost shy and suddenly a little disgusted by himself. But then he succumbs to the seduction of his companion and turns into a merciless egoist who simply takes what he needs. And this is also reflected in his political ambitions, in which he has to show himself from a particularly manipulative, hypocritical side.

Here a slightly more satirical undertone would have done the film good, because every now and then the production lacks the necessary bite that this story actually deserves. There is a slight flare-up of bitter cynicism from time to time. However, the film could have taken one more dose of this. But even so, "Zipper" is a really well done drama about human abysses with great actors and an appealing visual language. Despite some small weaknesses and some unused potential there is a clear one: worth seeing!

Picture + sound: The picture is absolutely clean and has good to very good detail sharpness in many scenes. The colour scheme is harmonious and shows its particularly atmospheric side especially in the outdoor shots. So there are no notable defects to complain about here, just as there are with the sound quality. The DTS-HD 5.1 MA Mix is pleasantly lively and can convince again and again with good surround moments. The fact that the dialogues in the German language version sound somewhat central and less harmoniously embedded in the events, as is the case with the English original version, has little effect on the positive overall impression. But there is one more than satisfied: Good!

Extras: In addition to some edited scenes and the trailer for the film, there is also an informative audio commentary by director and screenwriter Mora Stephens.

Fazit: "Zipper" is a gripping drama about sexual obsession, hunger for power and unfulfilled longings. Although the film doesn't use its full potential and could at times take a bit more bite, the good actors - especially Patrick Wilson - and the engaging staging make up for most of these weaknesses. The Blu-ray presents the film in good picture and sound quality and has some edited scenes as well as an informative audio commentary by the director to offer. All in all, a clear case of: Recommended