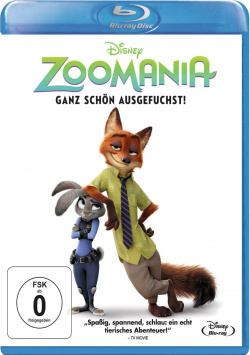 Film: The little rabbit lady Judy Hopps (spoken by Josefine Preuß) has big dreams: she wants to move to the metropolis Zoomania and make a career as a policewoman there. Despite all resistance, she passes the entrance examination and is allowed to start her job in the city. But besides her big colleagues, the little bunny doesn't have it easy, especially since she is ordered by the police chief to write only parking tickets. So she really didn't find her dream job. But then she gets the unique chance to prove what she is made of: together with a trickster, the charming and cunning fox Nick Wilde, she is supposed to solve the disappearance of some animals in Zoomania. In doing so, she uncovers a huge conspiracy that could soon put an end to the peaceful coexistence of the various animal species in Zoomania forever…

"Zoomania". is - apart from the incomprehensible change of the title in Germany from the quite meaningful "Zootopia" to the completely meaningless "Zoomania" - damn close to being a perfect animated film for the whole family. The staging is bursting with ingenuity, which makes multiple viewing almost imperative. The individual districts of the metropolis alone - from Sahara Square to the Amazon Quarter, Nageria to Tundratown - offer so many lovely details that you can't discover them all the first time. In addition, there are so many wonderfully bizarre things that make you shed tears in your eyes with laughter, which in turn makes you miss out on more little things. So get ready to travel to Zoomania several times at once.

The story told in this colourful environment is essentially a classic buddy cop comedy with some successful moments of tension. For very small viewers these may be a bit too gloomy and exciting, but small and big animation fans from 6 years on will be carried away by the search for the disappeared animals. Besides this somewhat conventional crime story, the makers around the directors Byron Howard and Rich Moore have also woven a very nice message about tolerance into the plot, which gives the whole thing a special touch. Lovable characters, wonderful allusions to film classics and the funniest sloths in film history also make animation fun stand out from the crowd.

I can hardly remember any other animated film in recent years where I laughed so much as I did in "Zoomania". There were perhaps more dramaturgically complex works, perhaps more imaginative. But when it comes to gag density, this animal family thriller undoubtedly plays in the first league. Moreover, Judy Hopps and Nick Wilde are a great duo to watch in their investigations. The film offers its audience two levels: one with cute characters and very obvious gags for the children and a slightly deeper level with more subtle adult gags for adults. So the whole thing works perfectly as entertaining, funny and exciting entertainment for the whole family. But there is also a very clear one: Absolutely worth seeing!!

Picture + Sound: The picture and sound quality of the Blu-ray is excellent. The absolutely clean picture with its very high overall sharpness lets the many small wonderful details of the movie come to the fore very well. The colours are warm and very powerfully mixed and there is also nothing wrong with the balance of contrasts and black values. The sound is available in the German version in a powerful DTS-HD HR 7.1 mix, which already fills the surround channels with life to such an extent that the comparison with the somewhat more lively English DTS-HD MA 7.1 track is not really disappointing. All in all, there is a clear one for the technical implementation of the film: Very good!

Extras: The Blu-ray has some nice extras on offer. We start with a feature that shows how the makers researched the behavior of their animal protagonists (ca. 9:58 min.). They sought help from the experts at Disney Animal Kingdom, but also travelled to Africa to observe the animals in the wild. Another featurette shows what different ideas the film was based on (about 9:15 min.), before the story developed, which was finally implemented. At a round table the creators then tell how the characters, the environment and the animation were implemented (approx. 18:23 min.). And also the film music gets its own short documentary (approx. 4:59 min.).

A look at the forensic files reveals which little allusions to other Disney films and characters are hidden in "Zoomania" (approx. 3:23 min.). It is very amusing to see where you can discover Mickey Mouse or references to "The Ice Queen". In addition to the music video for Shakira's "Try Everything" (approx. 3:21 min.) there is also a look at characters who didn't make it into the finished film (approx. 3:16 min.), as well as 14 additional scenes in the very early animation stage (approx. 28:03 min.). It's very interesting to see how some moments in the movie were planned quite differently and what other beautiful and amusing ideas were just about to make it into the movie. Worth seeing!

Fazit: "Zoomania" is one of the funniest and most imaginative animated films of recent times. The film is full of incredibly funny details and lovable characters, so you can watch it again and again. The Blu-ray presents the blockbuster, which has recorded over 1 billion dollars worldwide, in very good picture and sound quality and also has some very nice extras on board. That's what we're clearly advocating: absolutely recommended!