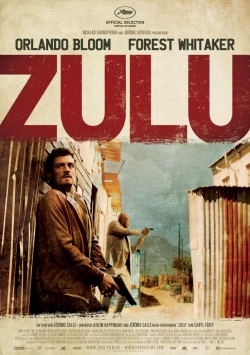 It initially looks like a routine case for the Cape Town Homicide Unit when the body of 20-year-old Nicole Weiss is found in the botanical garden. However, the longer Ali Sokehla (Forest Whitaker) and his young partner Brian Epkeen (Orlando Bloom) search for the murderer of the young woman, the more they discover the roots of their widely ramified machinations, which go back to the time of the apartheid regime. The battle against the old system's masterminds, who have allied themselves with the powerful dealers in the townships, soon leads to the first death in the ranks of the police. Now Ali and Brian realize that they will put themselves and their families in serious danger if they continue to investigate this case. But even that doesn't stop the two unequal investigators - because the machinations of the network they are tracking down could have deadly consequences for many people in the townships…

"Zulu" begins like a very conventional thriller, which spreads a little the atmosphere of Nordic crime food, but varies it with the rather exotic scenery of Cape Town. After the exciting, but not exactly  extraordinary first act, the story takes an unusual turn, linking the history of the apartheid regime with the machinations and the problems of life in the townships and spices it up with a solid thriller about the machinations of an internationally active cartel. And at the centre of the whole are two cops who are forced by this case to deal with the demons of their very own past.

The French director Jérôme Salle, who celebrated great success with the two "Largo Winch" films, has staged a very atmospheric, ruthlessly brutal thriller, which isn't always quite logical, but offers really exciting entertainment overall. Some small secondary strands do not seem to be really necessary in the overall context and provide for smaller lengths. But this is well compensated by the many very intense moments. Especially surprising is Orlando Bloom, who as a completely broken hothead delivers an extremely strong and convincing performance and can easily stand his ground alongside the Oscar winner Forest Whitaker. The unequal duo also carries the film through its somewhat weaker moments and makes the whole thing a real delicacy in terms of acting alone.

So the dense staging, the atmospheric imagery and the strong actors "Zulu" clearly lift it above the thriller mediocrity. But for an excellent representative of the genre it is still not enough. This is largely due to the fact that Salle, in spite of his highest ambitions, is trying to enrich his fictional story with real backgrounds, thus showing the reality of life in South Africa and the country's inner turmoil. Despite a good portion of bitter social criticism and some shocking scenes, the thriller lacks the necessary depth to actually achieve this.

Although "Zulu" hasn't become the big masterpiece hidden in the core of the film, Jérôme Salle has managed to create an outstanding and very exciting thriller, which shouldn't be missed by lovers of more sophisticated genre fare. Absolutely worth seeing!