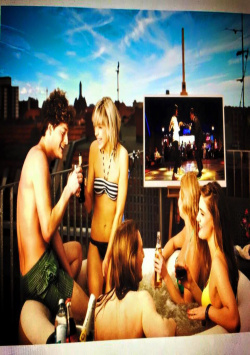 This is an original open air cinema concept: 30 whirlpools will be set up above the rooftops of Frankfurt, on the beautiful roof garden of the Sky Line Plazas next to the exhibition grounds on 10 and 11 July. In these the guests can watch PULP FICTION (10.07.) or the German comedy DESASTER (11.07.) before the official release. There are private pools for 6 or 8 persons, as well as single places in a mixed whirlpool. The whirlpools are heated to 40 degrees. Cooling down is provided by drinks from the neighbouring ALEX. An original, crazy and really special concept, which has already celebrated its successful premiere in Berlin and will be performed not only in Frankfurt but also in Cologne and Munich. Relax in the whirlpool with friends while the sun lowers over the Frankfurt skyline - it becomes difficult to concentrate on the film! It's gonna be a lot of fun, though. All information about the location, the movies and the ticket prices can be found HIER

And further information can also be found on Facebook: www.facebook.com/WhirlpoolOpenAirCinema