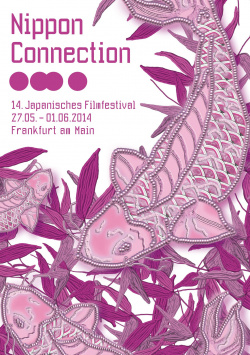 The program of the 14th Japanese Film Festival Nippon Connection in Frankfurt am Main is set. From 27 May to 1 June, the world's largest festival for Japanese cinema invites you to more than 100 short and feature films. Many of the films celebrate their German, European or international premieres at the festival. The selection ranges from quirky comedies and moving dramas to arthouse cinema and thrillers to cutting-edge documentaries. The festival centres at Künstlerhaus Mousonturm and Theater Willy Praml in the Naxoshalle will be the meeting point for the 50 or so filmmakers, actors and artists from Japan and the public. Further venues are the German Film Museum, the Mal Seh'n Kino and the exhibition space Eulengasse. In addition, a varied cultural supporting programme with exhibitions, lectures, workshops, concerts and culinary delights invites young and old to experience Japan with all their senses.

The Films
With around 400 new productions every year, Japan is the fourth largest film nation in the world. Nippon Connection presents visitors with a careful and multi-faceted selection of the latest films. Included in the Nippon Cinema series is the new drama Like Father, Like Son by director Hirokazu Koreeda, already acclaimed in Cannes and Venice, and Backwater, the new art house film by internationally acclaimed Shinji Aoyama. Great cinema also guarantees Sang-il Lee's unorgiveness: the remake of the western of the same name transfers the plot to 19th century Japan without further ado and presents world star Ken Watanabe as Japanese Clint Eastwood.

Japan is notorious for its original comedies. Lots of bizarre surprises are guaranteed by the typical Japanese business idea of an apology agency in The Apology King by Nobuo Mizuta. The latest film by the provocative star director Sion Sono is also eagerly awaited. In Why Don't You Play in Hell?, a yakuza gang gets lost in the film industry.

In addition, well-known audience favourites will again be represented with their works. Ryuichi Hiroki, for example, comes personally to Frankfurt to present his moving love drama Crying 100 Times - Every Raindrop Falls. The new work Tamako in Moratorium by Nobuhiro Yamashita shows how the dissatisfied young Tamako finally finds her own way.

Hard-boiled horror lovers are right at Lesson of the Evil by cult director Takashi Miike. Murder in times of internet and social media is the topic of the first Japanese-Indonesian thriller co-production Killers by the Mo Brothers. And in Yoshiro Nakamura's exciting thriller The Snow White Murder Case, the whole world twitters along, while an ambitious journalist tries to solve a murder.

Fans of the globally popular Japanese animated film can look forward to the second edition of the Nippon Animation section. A special highlight is the film Patema Inverted by Yasuhiro Yoshiura about a fantastic world in which things are upside down. Furthermore, Katsuhiro Otomo, creator of the legendary manga and anime film Akira, is back after a seven-year creative break. Nippon Connection presents its new short film compilation Short Peace. In addition to Otomo, the Oscar-nominated animation artist Shuhei Morita was one of the directors.

The Nippon Visions section is the forum for up-and-coming directors, independent filmmakers and films that go beyond the conventional. As a mirror of current trends and a platform for new talent, this programme is particularly appreciated by international trade visitors. Many of the directors and artists will present their works personally and answer questions from the audience. Special highlights are Tetsuichiro Tsuta's poetic epic The Tale of Iya and the timeless melodrama A Woman and War by Junichi Inoue.

Three years after the earthquake catastrophe in Japan, the wounds are still deep. The documentary films The Horses of Fukushima by Yoju Matsubayashi and Kesennuma, Voices. 3 by Yukihiko Tsutsumi are dedicated to the people (and animals) in the regions affected by the tsunami and reactor accident. The Connecting Bridge by deaf-mute director Ayako Imamura tells the story of how deaf people experienced the catastrophe and the time after it. The drama Fukushima by Hiroshi Kanno shows the shadows the nuclear power plant has cast on the region for 70 years.

This year's retrospective Nippon Retro is dedicated to Ko Nakahira: The Wild Child of the Sixties. The Japanese director Ko Nakahira (1926-1978) began his career as an assistant to film legends like Akira Kurosawa and Kaneto Shindo. In 1956 he shot the scandalous success Crazed Fruit and became a pioneer of the Japanese Nouvelle Vague. This and eight other films from the 1950s and 1960s offer the public an opportunity to immerse themselves in the rebellious period of the Japanese post-war generation.

The Competitions
Four prizes will be awarded for the first time at the festival. The Nippon Cinema Award celebrates its tenth anniversary this year. It is awarded by the audience to the best film from the Nippon Cinema section. The prize money of 2000 euros is donated by Bankhaus Metzler from Frankfurt. The most convincing work in the Nippon Visions series receives the Nippon Visions Jury Award from an international jury. Here the prize is the subtitling of the subsequent work, donated by the Japan Visualmedia Translation Academy from Tokyo. For the first time this year, viewers can also choose their favourite film from the Nippon Visions series. The winner of the Nippon Visions Audience Award, donated by the Japanese Cultural Centre in Frankfurt, will receive a cheque for 1000 euros. The best 12-second extra short film on the subject "Nippon in Motion" is awarded the VGF Nippon in Motion Award (250 Euro prize money, donated by VerkehrsGesellschaft Frankfurt am Main). Until 30.4.2014 all visitors to the festival website are invited to vote on the winner (www.nipponconnection.com).

strong>Nippon Culture
At Nippon Connection not only film fans will get their money's worth: Between visits to the cinema you can enjoy Japanese delicacies, a massage or browse through numerous stands. Numerous workshops, lectures and concerts invite you on a voyage of discovery: For lovers of Japanese traditions there are workshops on kimono, taiko drums, kobudo (martial arts from Okinawa), kyudo (archery), kendo (sword fighting) and tea ceremony. In addition, cooking courses, subtitling and manga drawing workshops can discover previously unimagined talents. The photo exhibition Tokyo 24-70mm by Natascha Pflaumbaum with Tokyo city scenes in the exhibition space Eulengasse provides an insight into modern Japan. A special highlight of the supporting programme is the culinary tour of Frankfurt, which is taking place for the first time this year. Musically, koto player and singer Karin Nakagawa will delight the audience with her Japanese harp (koto). The film programme will be accompanied by a panel discussion, discussions with filmmakers and lectures on the current situation in Fukushima, director Hirokazu Koreeda and Japanese cinema of the 1960s, among others.

Nippon Kids
Also for the youngest festival visitors this year's festival offers again numerous possibilities to get to know Japanese culture in a playful way. Children between the ages of 6 and 12 can try out workshops on the Japanese protector deity Jizo, the sword fighting sport Kendo, calligraphy and preparing a delicious lunch box. A painting workshop with the artist Kozue Kodama and a performance at the Japanese paper theatre Kamishibai are further highlights in Nippon Kids' programme. In addition, a Japanese children's film with spoken German dialogue will be shown.