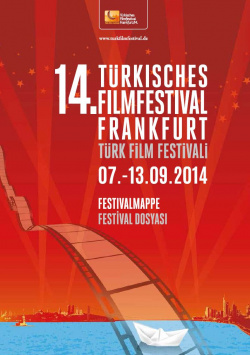 The countdown to the 14th edition of the Turkish Film Festival Frankfurt is running: In September it's finally time again! For just under a week, from 7 to 13 September 2014, the festival will present current feature, short and documentary films - including mainly Turkish, but also some German-Turkish and European productions.

In addition to exciting films, viewers can expect a top-class supporting programme with film competitions, panel discussions and much more.

The films will be shown in Frankfurt, Offenbach, Mainz and Langen. Important directors, scriptwriters, actors and producers come from Turkey to the Rhine-Main region for this event.

"Film is a medium that brings people together," says festival director Hüseyin Sitki. And so it has always been the aim of the Turkish Film Festival to build bridges between cultures. In addition, the festival sees itself as an ambassador of Turkish film. It has been booming for a few years now: the number of Turkish film productions is rising rapidly and the country's directors are permanent guests at the world's most important film festivals. At this year's Cannes Film Festival, the Turkish film "Winter Sleep" by Nuri Bilge Ceylan won the Golden Palm.

The Turkish Film Festival Frankfurt is once again turning its attention to current developments in the new independent Turkish cinema, which is defined by its cosmopolitanism. By the way, 2014 is a very special festival year: Turkish cinema is celebrating its 100th anniversary!

The festival's film programme focuses on the sections:

About this more than 30 screenings will take place at CineStar Metropolis and Orfeo'sErben in Frankfurt.

There will also be screenings in the Palat in Mainz, in the district centre Mathildenviertel Offenbach and in the Lichtburg Cinema Langen.

The films will be shown in German, dubbed German or in the original version with German or English subtitles. The festival will open with "Bi Kücük Eylül Meselesi" by Kerem Deren from the section "Current Turkish Film".

Also the student short film competition with contributions from Turkey and Germany is on the programme again.

Highlights of the supporting program

The 14th century Turkish Film Festival opens with a festive gala for invited guests from home and abroad in the CineStar Metropolis and ends with a big closing party in the Union Halle.

The project "Turkish Film Festival at Frankfurt Schools" has been so successful in recent years that it will be continued in 2014. This year the Carl-Schurz-Schule is taking part.

With the project "Film im Gefängnis" the festival organizes for the second time a film screening and discussion for the prisoners of the prison in Preungesheim.

At their concert in the factory in Sachsenhausen Mesut Ali and his Oriental Connection with their mixture of Balkan Beats and Jazz will provide for best mood. Turkish film music can be experienced in a second concert by Yesilcam Film Müzikleri.

All further information on the festival, the films shown and the supporting programme can be found at: www.turkfilmfestival.de