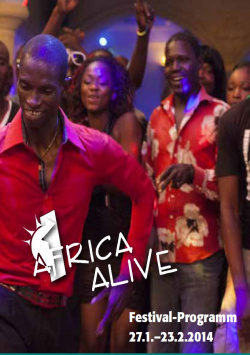 Films in the cinema of the Deutsches Filmmuseum and in the Filmforum Höchst Accompanying programme and film festivala. in the Haus am Dom and in the Brotfabrik

In 2014 Africa Alive celebrates a round anniversary: already for the 20th time the festival brings African culture to Frankfurt. This year's focus is on women, both in Africa and in the diaspora. The extensive film programme is completed by a reading, panel discussions, an exhibition, concerts and a children's and youth programme.

The women are increasingly regarded as bearers of hope for the African continent. This tendency is clearly noticeable in cultural production, in literature as well as in film. Many strong women were also represented at the Pan-African Film Festival, both as directors and producers and through their presence in the various juries.

The main theme also offers a review of 20 years of Africa Alive from the perspective of women. Classics of African cinema by directors such as Sarah Maldoror, Fanta Regina Nacra, Ingrid Sinclair or Néjia Ben Mabrouk will be on view. The Senegalese Safi Faye, who became internationally known as the first African director, will present her classic KADDU BEYKAT (SN 1975) and talk about her work on Tuesday, February 4 at 6 pm in the cinema of the German Film Museum.

From the rich spectrum of current productions by committed female filmmakers, POR AQUI TUDO BEM (AO/PT 2011. R: Pocas Pascoal) and NOIRE ICI, BLANCHE LA BAS (FR/SA 2011, R: Claude Haffner) are among those to be seen. The directors will be guests at both screenings in the cinema of the Deutsches Filmmuseum.

The film programme starts on Thursday, 30 January, in the cinema of the Deutsches Filmmuseum with a drink at 7 pm and the film GRIGRIS (TD/FR 2013. R: Mahamat-Saleh Haroun) at 20:15.

An exhibition in the foyer of the Filmforum Höchst with portraits of filmmakers offers a further look at the history of African cinema. The exhibition "Quo vadis, Africa?" will open at the Haus am Dom on Monday, 27 January, including a caricature competition. On Saturday, 22 February, the Senegalese trio will play Dakar in the

bread factory. The traditional children's festival concludes the festival on Sunday, 23 February, also in the bread factory with the children's theatre of the group "Adesa".

Other events, all venues and dates under