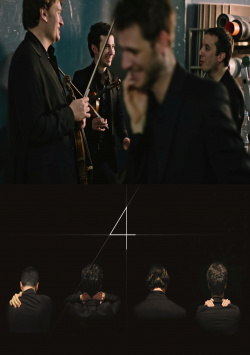 4 - Celebrated documentary film as a guest at Orfeo's Erben

The winner of the Best Documentary Award in Los Angeles and best-seen film at the Munich Documentary Film Festival can now also be seen in Frankfurt at the fine ORFEOS ERBEN cinema. Phone ticket reservation is recommended.

Wednesday, March 1, 18:30 - followed by a film talk with the filmmaker

4 is an independent documentary about one of the most outstanding string quartets in the world - the Quatuor Ebène. Gradually, 4 bsp;4 leads the audience into the ambivalent interplay of the relationship of the four musicians during their Italian tour. Bolzano, Perugia, Florence and Siena, as well as Salzburg and Berlin, are the stage for a personal piece against the backdrop of aspiration and reality. It is not the stage performances of the award-winning French string quartet that stand in the foreground, but the events behind the stage, which usually remain hidden from the audience: the struggle of the musicians with the notes, their colleagues - and with themselves.

The musicians of the Quatuor Ebène have allowed a spectacularly close view of themselves in every situation and did not present their self-images to the camera, but instead took the opportunity to rediscover themselves through film work. This was only possible because of the great friendly trust between the musicians and the film team that had developed over several years. This trust was the basis of the joint work.