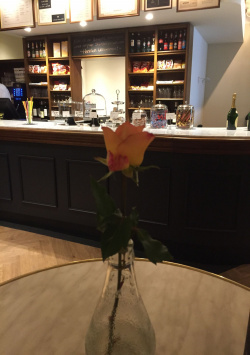 A new foyer for the CINEMA

In January this year, Christopher Bausch, born in Kronberg, Germany, took over the management of the CINEMA cinema at Roßmarkt and the HARMONIE in Sachsenhausen from Harald Vogel. The 37-year-old knows his way around cinema, having opened the CASINO cinema in Aschaffenburg in 2004 and thus created a very special place for arthouse lovers. So Vogel has definitely put his cinemas in the right hands. Up to now, however, the new line had only made itself felt in the three halls of CINEMA through an expansion of the program offering. But now there is also a very clear visual and atmospheric change in the popular cinema at Roßmarkt. The conversion of the adjacent hotel made it necessary to redesign the foyer and entrance area. Bausch took the opportunity to put his own stamp on the cinema. And it's really something to be proud of.

Although the conversion work could not be completed completely during the several-week closure of the cinema, the new foyer already leaves an extremely positive impression. The reception area is now much larger, appears warmer and more inviting. In addition to a bench seat, which will be installed shortly, there are also bistro tables and stools where you can wait for the entrance to the hall. The gastronomic offer was expanded and the sales counter was extended. Small details such as a handwritten sign in the middle of the counter or the sweets offered on a shelf or in glasses give the foyer a very individual character. As a guest you really feel welcome here right away and you can get rid of everyday stress even before the start of the film - at least much better than was the case in the old, much more cramped entrance area.

This redesign also shows, like the expansion of the programme, that Christopher Bausch loves what he does. He sees cinema not only as a screening venue for films, but also as a place for encounters and as an opportunity to take a well-earned break - even if only for a few hours. And the new foyer radiates this despite the still missing pictures on the wall, the not yet installed bench or in places not yet finished plastered places on the walls already now. The halls themselves will not be rebuilt, as Harald Vogel invested a lot of money in new seating and technology only a few years ago. Nevertheless, it should be clear: The reconstruction of the foyer of CINEMA will probably not be the last change Christopher Bausch will make the two cinemas and thus the Arthaus scene in Frankfurt even more attractive. We are curious!