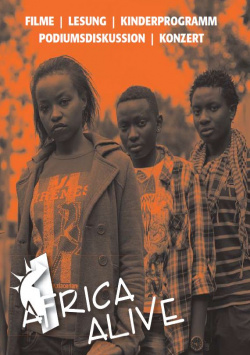 In its 22nd edition, the Africa Alive Festival once again presents the African continent with a broad spectrum of documentary and feature films. In addition to current films and prize winners of the FESCAPO Film Festival in Ouagadougou, there will be an extensive accompanying programme.

This year's thematic focus will be on generational and political change in Africa under the title "Generation Change. In many African countries there has been protest in recent years against outdated regimes that have held on to power against the will of the people. At the end of 2014 there was a change of power in Burkina Faso and here too the initiative came from the people. The significance of music, especially rap and hip-hop, was characteristic of the citizens' movements in both countries. During the festival the films UNE RÉVOLUTION AFRICAINE (BF 2014) and BOY SALOUM (FR 2013) will be screened as well as the short film programme "African Hip-Hop. The fight against repression is also linked to the persecution of homosexuals in some African countries. In his film STORIES OF OUR LIVES (KE/ZA 2015) Jim Chuchu tells the story of homosexual women and men in Kenya.

The opening film of Africa Alive, MÖRBAYASSA (GN/FR 2014), is about a young woman who has freed herself from financial and social constraints and is looking for her daughter in Europe. The director of the film, Cheick Fantamady Camara, is expected as a guest.

The entire festival program can be found at http://africa-alive-festival.de