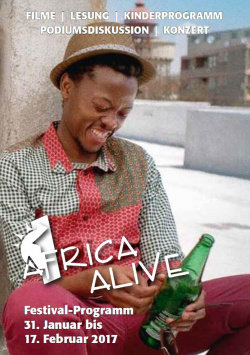 The program for the 23rd edition of the festival
Tuesday, Tuesday 31. January, to Friday, 17 February

The 23rd edition of the Festival Africa Alive presents the filmmaking of the African continent with a broad spectrum of documentaries and feature films. In addition to current films, there will be an accompanying programme consisting of concerts, readings, an exhibition, a panel discussion and a children's programme.

This year there will be a focus on the topic of migration. Two documentary films will be shown, which report from the perspective of the protagonists. In LIFE SAARABA ILLEGAL (DE 2016) Saliou Sarr and director Peter Heller accompany his two cousins from Senegal into migration. Both will be guests at the presentation on Sunday, 5 February, at 6 p.m. in the German Film Museum. In LES SAUTEURS (DK 2016) Abou Bakar Sidibé films his life in Morocco on the border of the Spanish exclave Melilla and his attempts to overcome the security fence.

The country focus is on South Africa. The central question is what has become of the "rainbow nation": the African National Congress (ANC) is in crisis, and more and more black South Africans are refusing to follow President Zuma and his ruling party. A small selection of South African films illustrates how this situation is reflected in the film production of the important African film country and how filmmakers position themselves.

To kick off the festival, a concert by Ghanaian singer-songwriter and multi-instrumentalist Adjiri Odametey will take place at the New Theater Höchst on Tuesday, 31 January at 8 pm. Before that, the exhibition "Telling Stories" by Nigerian artist Emeka Udemba will open at 6 pm in the foyer of the theatre.

At the opening, South African director Sara Blecher and her film AYANDA (2015) will be guests at the Deutsches Filmmuseum on Wednesday, February 1. On Thursday, February 2, Amina Weira from Niger is expected at the cinema of the German Film Museum. She presents her film LA COLÈRE DANS LE VENT (2016) about uranium mining in Arli.

The panel discussion on Saturday, February 4 at the Evangelical Student Community Frankfurt/Main at the University of Frankfurt is dedicated to the UN Decade for People of African Origin. On Wednesday, 8 February, Filmforum Höchst will be showing the film GHOSTLAND THE VIEW OF THE JU/´HOANSI by Simon Stadler and Catenia Lermer, both of whom will also be guests, which was awarded the Hessian Film Prize for the best documentary film 2016.

For more information about the program, please visit the website http://www.africa-alive-festival.de/