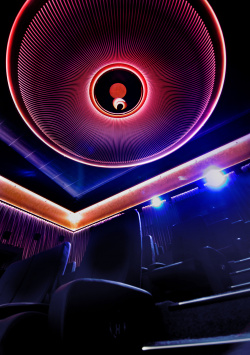 Finally it's time. Since 21 December 2012, Frankfurt has had a premium cinema with the Astor Film Lounge - even above the rooftops of the city. In the former Cinemagnum in the upper floor of the Zeil-Galerie you can now enjoy a very special kind of cinema. The philosophy behind this premium cinema is actually a very obvious one. For many people, going to the cinema is no longer a real pleasure. Film lovers beyond the age of 30 often feel uncomfortable in the multiplex cinemas. Long queues at the cash desks and the counters, popcorn and other sticky residues on floors and seats, the unpleasant smell of nachos and their sauces and of course the visitors, for whom the film is of secondary importance and who prefer to talk to their neighbours, Making a phone call or playing around with your mobile phone - all this makes some people who used to like going to the cinema think twice today whether a film that will be released on DVD and Blu-Ray in a few months is really worth investing a lot of money and even more nerves in a visit to the cinema. Whether under these circumstances it's worthwhile to watch the film in an environment that is only geared towards mass processing, but can't deal with the individual customer. Certainly, multiplex cinemas often have an enthusiastic audience and therefore an absolute right to exist. With the appearance of the multiplex houses and their increasing popularity, many smaller cinemas disappeared, which often lost their basis of existence frighteningly fast with sinking spectator numbers and rising rents. In recent years, Frankfurt, too, has increasingly had to bid farewell to its beloved cinemas, such as the Zeil cinemas, the Turmpalast or, of course, the Royal. A few months ago, the Cinemagnum in the Zeilgalerie was also hit. Since other cinemas in the surrounding area have also been able to play 3D, the cinema had lost its former monopoly and could no longer lure enough viewers to the impressive screen, perhaps due to the somewhat unfavourable location.

However, the mourning for the end of the cinema magnum should be limited. The end of one cinema means a promising new beginning for Frankfurt. The cinema operator H.-J. Flebbe opened the Astor Film Lounge, the first premium cinema in the Main metropolis, here in December after an elaborate and much more expensive renovation than planned. After Flebbe has already successfully implemented the concept in Berlin, Munich and Cologne, he hopes that his fourth premium cinema will also be positively received by the public. And the chances for this are good.

The concept clearly puts the cinema visitor and his comfort first. So you are greeted by a doorman at the entrance, take an express elevator directly to the spacious foyer with bar, can leave your jackets at a guarded, free cloakroom, get a welcome cocktail served and can then be served directly at the place before the film starts. Arm and legroom are also guaranteed in the comfortable leather armchairs, with the number of seats being reduced from the current 380 to 201. Especially comfortable are the box seats with footstools, which offer extreme cosiness and will certainly quickly become the most popular places in the cinema.

Popcorn and other fragrance-intensive sound-makers do not exist here, but selected fingerfood (such as a small cheese platter) and a good selection of alcoholic and non-alcoholic beverages.

In order to create a very special cinema atmosphere, an extensive renovation was necessary. In addition to the seating, a new staircase system was installed and the ceiling was lowered. In contrast to the times of the Cinemagnum, the screen is now covered by a curtain and a completely new lighting system has been installed, which will give the term "Lichtspielhaus" a completely new meaning. The viewer can get an idea of this before each performance, when a small light show tunes in to the film.

The program will consist of upscale entertainment cinema, the target audience is 30+. It is not supposed to be a cinematic art cinema, but an upscale entertainment cinema for a primarily adult audience. In addition to the main film, there will usually also be a small supporting programme, such as short films and some advertising. Besides also again and again special meetings are ordered such as the popular transmissions from the Metropolitan opera or Ballettaufführungen.

A completely special service will offer the Astor film Lounge shortly as first cinema at all in Germany: who would like to see a film not in the German version, but rather in the original, can be given headphones, on which then over infrared technology the original clay/tone is transferred.

From the beginning of 2013, guests arriving by car will also have the opportunity to park cheaply in the MyZeil multi-storey car park.

Good service, undisturbed film enjoyment, state-of-the-art screening technology and a comfortable and cozy ambience - all this the Astor Film Lounge wants to offer its guests. The fact that this must be a little more expensive than a "normal" visit to the cinema is something one is only too happy to accept. A performance before 4 pm costs between 12 and 14 Euro (+ if applicable surcharge for 3D films) and after 4 pm between 14 and 16 Euro.

It's nice that the Astor Film Lounge finally brings real cinema feeling to Frankfurt! If you want to really enjoy the cinema again, can do without the usual snacks, can leave your mobile phone in your pocket for two hours to enjoy a film undisturbed and are willing to pay a little more for it, a visit to the astor Film Lounge is highly recommended.

More about the Astor Film Lounge on http://www.frankfurt.astor-filmlounge.de/.