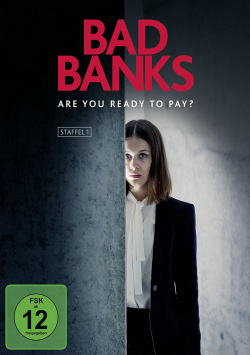 It's possible: With the first season of the series "Bad Banks" (season 2 has already been ordered) the impressive proof was produced that also in Germany first-class television with high entertainment value, an exciting story and great actors can be staged. Outstanding reviews and inquiries from all over the world are the logical consequence. After the TV broadcast, the series, some of which was shot in Frankfurt, has now also been released on DVD and Blu-ray. In detailed interviews with the bonus material, the makers explain the background to the series, the intensive research and the demands made on the shooting.

The result is really impressive. The series tells a complex story from the world of the people who trade dizzying sums in the glass bank towers - and conjure up the next financial crisis. Exciting, cool and bitterly angry - this is what good television Made in Germany looks like!

The Office for Communication and City Marketing Frankfurt spoke with Lisa Blumenberg, initiator of "Bad Banks" and producer of the Studio Hamburg subsidiary Letterbox, about the development of the plot, the shooting, the world of the bankers and about Frankfurt.

Watch your own productions on TV?

I've never had a party to watch one of our movies with friends before. But: I really enjoyed the premiere of "Bad Banks" at the Berlinale in the Zoopalast. The whole ensemble was there. We sat hand in hand in this legendary cinema and watched the first episode together - it was a great experience.

That sounds like a big film family - how was the atmosphere on the set?

It was a special spirit that I rarely experienced like this. And who had to do with every single one of them. The ensemble and the team couldn't get enough of each other. The shooting days were long and still everyone wanted to sit together in the evening.

How long did you shoot?

From November 2016 to March 2017. We had 63 shooting days for six episodes, which we spent mainly in Frankfurt, Luxembourg and Berlin, but also in London, Leipzig, Paris, Brussels and Bahrain. That was a tight program.

How did you get the idea for Bad Banks?

The idea formed during the 2008 financial crisis. The Lehman bankruptcy has shown how extremely thin the ice on which the rich western world moves is. The system of banks, money and investment is existential for the functioning of our world, people trust in it. And at the same time, it's unstable and unpredictable. If the domino game gets going, nobody knows where the next stone will fall. I wanted to tell from Germany, from Frankfurt, how this system works, which at the same time is valid all over the world and therefore has global relevance.

We have sold the series in more than 30 countries. Among others to Australia, New Zealand, Great Britain. Further deals, including with the USA, are about to be concluded. This interest is a great praise for our production. Which, of course, I didn't lift alone. A project of this magnitude is implemented with a well-rehearsed team, including Günther Russ and Christian Friedrichs, who have concluded the financing with me, and junior producer Lisa Arndt. In addition, with HessenFilm and Medien we had a strong supporter in the region at our side.

"And which series are you watching?" has almost become a standard question. Why are series so popular?

That has several reasons. On the one hand, the viewers obviously feel the need to get to know and accompany a character more intensively. In series you can show the complexity of the characters with all their peculiarities, contradictions, grey areas, shady sides and dazzling facets in a different quality than in a 90-minute film. On the other hand, new technology and distribution channels always demand new content. Nobody can watch all the shows. And yet the needs of broadcasters and platforms are far from being met.

How do series work today?

The basic idea is always to open up a new world for viewers. And if it's space, as a child I was totally fascinated by spaceship Enterprise. Bad Banks" also shows a strange, closed world. With our series we want to tell about her from an internal perspective and try to understand her. Without prejudice, but with great curiosity.

How much research was necessary?

For a stuff like "Bad Banks" you can't think up a single line. That was hard work for head author Oliver Kienle and his team of authors. We tell you how a new financial crisis can develop - first of all you have to do a detailed basic research. Everything must be in order. Otherwise, the bankers will laugh themselves to death when they watch our show. There were four consultants from the beginning who had worked as investment bankers, including a New York broker for the female perspective. We wanted to know and understand the principles behind banks' business models, what products are available and why they were invented. In a second step it was important for us to learn: How does the world of bankers feel? How does it taste, smell, look? We and especially director Christian Schochow have had dozens of background conversations about this.

Your world is feverish, dazzling, adrenaline-laden. It is fascinating, an elite world: bankers are educated, fast and international. They are passionate and in constant competition. They don't care about money anymore, they care about recognition. Bankers have all that in common. And yet they are fundamentally different. This is what we want to show with the characters from "Bad Banks".

What do the people from the banking world say about your series?

It is very well received. Some people say that they have devoured the consequences. Others think the plot is somewhat exaggerated. However: If you want to show the development of a financial crisis in six episodes à 50 minutes, this exaggeration is due to the narrative condensation.

ZDF has already announced a second season of "Bad Banks" - when will it start?

We are in the middle of development. We already worked out the concept during the first season. In winter 2019 we want to start shooting.

Frankfurt is regarded by many as a cold financial metropolis - how did you experience the city?

Completely different. I have known Frankfurt since the end of the 80s when I was a student in Mainz. Frankfurt was for me the sexy alternative to the cosy Mainz, the TAT my living room. Since then the city has changed a lot. Bank towers, red light, old town - I find this mixture of different worlds highly attractive. The view from the Sachsenhäuser Ufer, from the film museum over to the skyline - for me it is the most beautiful of the city. Frankfurt is also very familiar with our responsible editor at ZDF, Caroline von Senden. She lives there and has always been very happy to come to the set.