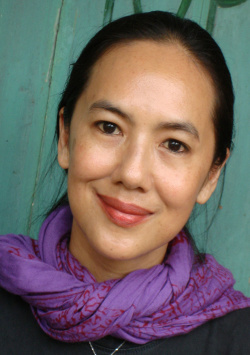 Films and documentaries by Ing K, Thai filmmaker, from 15th to 18th century March in Frankfurt am Main

First ever show of works in Europe

The filmmaker is personally present

The Thai Ing Kanjanavanit (*1959; stage name: Ing K) is one of the most interesting and daring Southeast Asian filmmakers of our time. In her hands, the camera becomes a weapon in the struggle for freedom of expression, and the artist is not afraid of repression. On 15, 17 and 18 March 2017, the Filmkollektiv Frankfurt e.V. is organising the first complete exhibition of works ever on European soil. Ing K will personally attend all screenings at the German Film Museum (Wednesday, March 15, 8:15 p.m.) and at the Student House on the Bockenheim campus (March 17 and 18) and will afterwards talk about her films. The exhibition comprises two feature films and five documentaries, which will be shown in six performances.

Your first feature film KON GRARB MHA / MY TEACHER EATS BISCUITS (1998), inspired by John Waters’ early work, takes place in an ashram where a dog is worshipped as a god. One of the first no-budget-Independent films from Thailand, he was banned by state censorship for insulting religion. Afterwards she concentrated more on painting and after almost ten years of abstinence from film POLAMUANG JULING / CITIZEN JULING, which was shown in 2009 at the Forum of the Berlinale, shot a relentless documentary about the murder of a Buddhist teacher in the Muslim-dominated southern part of Thailand.

2012 she shot SHAKESPEARE MUST DIE, the first film adaptation of a Shakespeare play ever in Thailand, staged in a breathtakingly dynamic, colourful style. Although it is a literal over- and conversion of the play "Macbeth", the Thai censorship classified this film as a "threat to national security". Therefore, the three-hour opus magnum has not yet been allowed to be performed in their home country. Immediately afterwards, she shot a unique film: a documentary about the ban on her own feature film, in which she documents endless Kafkaesque administrative procedures, application procedures and statements by the censors. Her current multi-part BANGKOK JOYRIDE project (of which the first two parts are shown) arranges documentary footage of major demonstrations in Thailand into a multi-layered protest symphony.