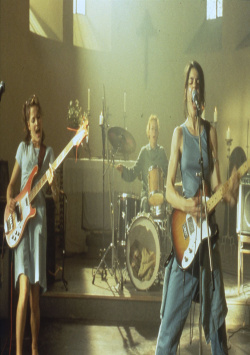 Carte Blanche at the Film Museum: 20 Years of BANDITS

Katja von Garnier's cult film BANDITS about a women's band fleeing prison celebrates its 20th birthday this year. Anniversary. On Sunday, September 24, the leading actresses Nicolette Krebitz, Katja Riemann and Jasmin Tabatabai will be guests at the cinema of the Deutsches Filmmuseum, where the film will once again be shown on the big screen. In the foyer of the Deutsches Filmmuseum, the original drums used in the film are exhibited.

For the film:
Four girlfriends playing together in a prison band use an appearance at the police Christmas ball to break out. At first glance, the four women have only one thing in common: their love of music. On their adventurous escape from the police they become media stars, and their music finds more and more fans. After all, the "Bandits" even give an improvised open-air concert under the eyes of the police, who don't want to cause a scandal, but whose operations director is just waiting for the film to finally start.

On the occasion of the 20th anniversary of BANDITS, the cinema of the Deutsches Filmmuseum honours the leading actresses with a Carte blanche in September: Nicolette Krebitz, Katja Riemann and Jasmin Tabatabai have each selected three works from the history of film that have particularly influenced and influenced them. Before each film a video message is recorded.

Nicolette Krebitz wished MADEMOISELLE (FR/GB 1966) with the recently deceased Jeanne Moreau, Steven Spielberg's E.T. THE EXTRA-TERRESTRIAL (US 1982) as well as THE LITTLE GIRL WHO LIVES DOWN THE LANE (CA/FR 1976) with the young Jodie Foster.

Katja Riemann decided to do the music documentary WHAT HAPPENED, MISS SIMONE? in addition to the cult classic THE BLUES BROTHERS (US 1980) by John Landis. (US 2015) and for Susanne Biers Oscar-winning drama HÆVNEN (DK/NO 2010).

You can also find more information at www.deutsches-filmmuseum.de