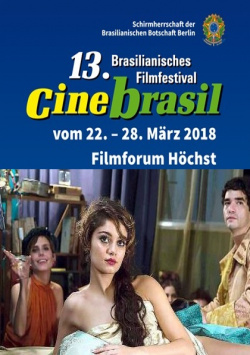 At the end of March there will again be the unique opportunity in the cinema year to get to know new Brazilian cinema at Filmforum Höchst. Although Brazil is one of the largest and most important film countries in Latin America, unfortunately not a single Brazilian film was shown in German cinemas in 2017.

The selected films have won prizes at the festivals in Brazil, but also worldwide.

Family tales tell the films As duas Irenes - The Two Irenes in which two previously unknown half-sisters meet and Gloria e Graça in which a successful transfemale sees herself forced to assume responsibility for the children of the sick sister. In the wild and free 1960s just before the 1964 military coup, Domingos Oliveiras film BR - 716 plays in the circles of Bohème.

Three documentaries complete the program: Curumim, which documents everyday life in prison through the eyes of a prisoner, Menino 23, which deals with Brazilian Nazi ideology and the enslavement of fifty black children in the 1930s, and Pitanga, which documents the life and work of the Afro-Brazilian actor Antônio Pitanga, who collaborated with famous directors.

Further information and trailers of the movies can be found at http://www.filmforum-höchst.de on the Internet.