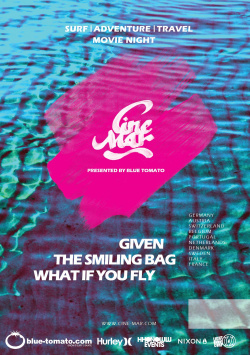 The "Cine Mar - Movie Night" is going through Europe for the fourth time. Following on from the successful tour in 2016, 2017 will see ten countries with over 50 stops in various cities - including Frankfurt! With three new films from Surf- and Oceanworld in their luggage, the organizers will take you on an evening trip across the planet to remote spots, cool and warm waters and distant cultures.

The film "GIVEN" documents the journey of the Goodwin family. The 14-month trip is narrated from the perspective of six-year-old Given, son of the surfer couple Aamion and Daize Goodwin. This storytelling enables you to experience your travelled goals with a typical childlike openness and curiosity. The film conveys an authentic picture of strong family cohesion, the best surfing and great adventurous spirit. In "The Smiling Bag" Don Agius takes you on an audiovisual trip that cannot be categorized as a "normal" surf film. Through special effects and experimental filters, his project is positive-unusual and based on footage from the last three years. The Outcome is more like an art project that shows you the surf world from a new, exciting perspective.

The "Cine Mar - Movie Night" team looks forward to showing you the 15-minute version of the film on the Spring Tour 2017! The Hawaiian artist Sean Yoro (a.k.a. HULA) shows in "What If You Fly" his journey into the ice-cold waters of Baffin Island and lets you dive into the culture of the Inuit. The film documents the realisation of an artistic work, which turns out to be a great challenge due to nature's stubbornness. Authentic, breathtaking and close to nature - a film that will accompany you to sleep!

GIVEN by Jess Bianchi (USA) 75 Min

More info can be found at: http://www.cine-mar.de/