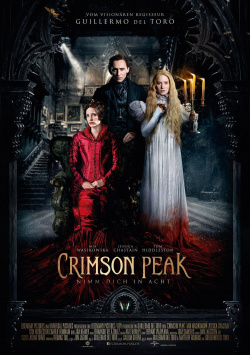 IN THE LEND OF UNIVERSAL PICTURES INTERNATIONAL GERMANY

Today we have four beautiful, dark character posters for you about Guillermo del Toro's new masterpiece CRIMSON PEAK, which will be released in German cinemas on October 15, 2015. We take the opportunity to introduce you to the four main characters of the creepy romance.

Mia Wasikowska as tender beauty Edith Cushing. The young author is a passionate writer of ghost stories and is heavily involved in a tragedy in her own family. Freshly married to her husband Sir Thomas Sharpe (Tom Hiddleston), she moves to the manor house of the Sharpe family. There she quickly realizes that reality is often much more scary than her own stories...

Tom Hiddleston as mysterious seducer Sir Thomas Sharpe. With his charm, the nobleman wins the heart of the insecure young writer Edith Cushing (Mia Wasikowska). But his true nature and motives remain inscrutable. On the family estate on CRIMSON PEAK the secrets of his past live on.

Jessica Chastain as the commanding sister Lady Lucille Sharpe. She is the strict mistress of the awe-inspiring estate on CRIMSON PEAK and the family seat as fatefully connected as her brother Sir Thomas Sharpe. Her new sister-in-law Edith Cushing receives her only reluctantly in her home and seems to have as many secrets as the house itself.

Charlie Hunnam as a caring friend of Dr. Alan McMichael. His heart has belonged only to Edith Cushing since his youth. As her closest confidante, he is at her side at all times. Deep concern drives him after Ediths marriage to Sir Thomas Sharpe, whose louder motives he strongly doubts. And the young author probably also feels more for her childhood companion than pure friendship...

Discovers the gruesome secrets of the four main characters VON CRIMSON PEAK from the age of 15. October 2015 in German cinemas!

Guillermo del Toro is the undisputed master of fantastic horror stories. The creator of such genre classics as Pans Labyrinth, Hellboy, Pacific Rim and most recently the TV series The Strain In his new film as director and co-author of the screenplay, a young writer experiences that reality writes much more terrible stories than she ever thought up for her novels.

19th century England: The young author Edith Cushing (Mia Wasikowska) hasn't been married to Sir Thomas Sharpe (Tom Hiddleston) for long, but already her first doubts arise whether her incredibly charming husband really is who he seems to be. Edith still feels the after-effects of a terrible family tragedy, and she realizes that she is still attracted to her childhood friend Dr. Alan McMichael (Charlie Hunnam). Through her new life in the lonely country house in the north of England, she tries to finally leave the spirits of the past behind her. But the house on Crimson Peak - and its supernatural inhabitants - don't forget so easily... because between desire and darkness, secrets and madness lies the truth below Crimson Peak.