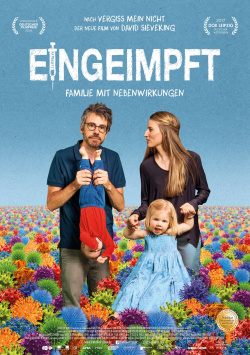 The filmmaker David Sieveking is coming on Tuesday, 11.09.2018 at 8.30 pm to the Cinema to celebrate the premiere of his new documentary film EINGEIMPFT with the audience, which will be released nationwide on 13 September. And that's what the movie's about:

A child is born. The happy parents, Jessica and David, greet their daughter Zaria with loving care and she develops splendidly. But already after a few weeks the family idyll is disturbed: The perfectly healthy little girl is to be vaccinated against eight different diseases. Jessica is against it because of her bad experience with vaccination. She is afraid of side effects or even a vaccination damage, while David is much more worried about the threatening diseases, even if most of the dangerous epidemics have been eradicated in our country by now.

Jessica's discomfort leads David to deal intensively with something that was never an issue for him: he always took vaccination for granted like brushing his teeth. In order to keep the family peace, he decides to tackle the problem in a professional way: He has now found the theme for his new film and his research soon shows that Jessica's gut feeling is not out of the air. The question "inoculate yes or no?" is a long seller for parents on playgrounds, parties and in daycare centres. But there is also a controversial debate among renowned scientists. Constantly torn between his domestic duties and his investigative research, David travels halfway around the world, meeting doctors, researchers and stakeholders to discover that current vaccination practice is under scrutiny worldwide. But time is running out: measles breaks out in the neighbourhood of Berlin, Jessica is pregnant again and the vaccination decision for the little Zaria is overdue.

After his cinema success VERGISS MEIN NICHT, the award-winning documentary film about life with his dementia-stricken mother, David Sieveking turns in his usual autobiographical manner to a topic that is a source of heated debate all over the world: Vaccination. EINGEIMPFT provides impulses for a constructive approach to the complex topic and is at the same time a relationship comedy that takes us into the turbulent everyday life of a young family - including all ups and downs.

David Sieveking has never questioned vaccinations until after the birth of his daughter it turns out that his partner refuses vaccination. Now good advice is expensive! David Sieveking uses the relationship conflict as an occasion for his unbiased research. He examines the question of how vaccinations work, what risks and side effects exist, what diseases are threatening, and weighs pros and cons. Whether at the Robert Koch Institute in Berlin, the World Health Organization (WHO) in Geneva or innovative researchers in West Africa: David Sieveking is as persistent as he is conscientious, as sensitive as he is open-minded in his search for the best solution for his growing family.

David Sieveking has also produced a book of the same name, which sheds light on the background of the film plot and was published by Herder.

More info about the film you can find HERE