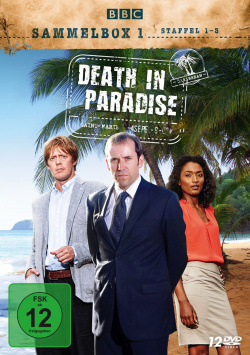 Death in Paradise - The first three seasons in one box

The popular crime series DEATH IN PARADISE will soon go into its seventh round on DVD. The leading role was changed several times during the seasons, which didn't detract from the popularity of the entertaining murder hunt against a dreamlike backdrop. In order to shorten the waiting time for the new episodes, the first three seasons now appear again in a collection box. And that's what it's all about:

The job of the Detective Inspector on the Caribbean island of Saint-Marie can justifiably be described as a quite dangerous one, since the over-correct DI Richard Poole from London is sent to solve the mysterious murder of an English colleague. But the dream island proves to be a real nightmare for Poole! The fussy, ever-suit-wearing stiff clichéd Brit is struggling with heat, sand and the casual way of life on Saint-Marie, and he has far more problems finding a good cup of tea than finding the culprit… But after the first culture shock (on both sides!), he is not only a good man, but also a good man.) Poole arranges himself with the local police team Camille Bordey (favourite ringtone "I Shot The Sheriff"!!!), Dwayne Myers and Fidel Best and the different ways of working and living. In the sweat of his face, the genial-analytical Poole solves all murder cases with bravura - except for the last one…

Then another London investigator is sent to the paradisiacal island to clarify the premature death of his predecessor. In contrast to DI Richard Poole (Ben Miller, Primeval, Doctor Who, Paddington 2) the new investigator Humphrey Goodman, played by Kris Marshall (Actual… Love, Dying For Beginners, Traffic Light) is enthusiastic about the Caribbean way of life, but Poole is in no way inferior when it comes to eccentricity. Camille, Dwayne and Fidel quickly realize that they have another bizarre Englishman on their necks after the meticulous pool with Goodman - he writes, for example, his observations on napkins and beer mats… Goodman's supposedly disorganized approach to the investigation initially seems alien to them, but it doesn't take long before they realize that they have a clumsy but unusually sharp-witted detective as their new superior.

The British-French co-production Death In Paradise is a crime series with a lot of wit and charm, tricky murder cases and Caribbean laissez-faire. The consistently likeable team and a green thread in the shape of lizard Harry make the series also extremely endearing. It was actually shot on one of the most beautiful holiday islands in the world, Guadeloupe, because Saint-Marie doesn't really exist. Crystal clear water, white sand, summery temperatures, reggae, ska and calypso rhythms and wonderfully relaxed people - this simply awakens the wanderlust and the desire to pack suitcases in every spectator. Death In Paradise has been running since 2011 in the not exactly sun-drenched UK - so it's no wonder that millions of viewers per season bring a bit of holiday feeling into their living rooms, and here, too, around 1 million viewers per season follow the cheerful crime series on ZDFneo.

Series inventor Robert Thorogood, who was discovered at a screenplay competition, tells in the best Agatha Christie-style closed tricky crime stories with an unpredictable ending and lets his protagonists Richard Poole (in 16 episodes) and Humphrey Goodman (in 46 episodes) act with the same gift and combination of a modern Hercule Poirot. Towards the end of each case Poole and Goodman, after the obligatory Aha experience, let all suspects and unsuspects come together to expose the perpetrator… Death In Paradise is, so to speak, the very best British "Whodunit" under the Caribbean sun.

>Edel:Motion will release the 1st DVD collection box Death In Paradise (season 1 - 3 with 24 episodes à 50 minutes and funny Making Of material) on 21 September 2018.

You can find detailed reviews about the seasons here: