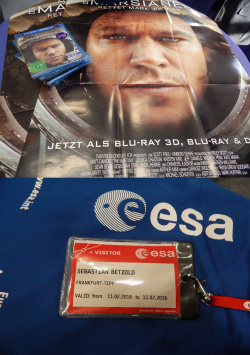 Ridley Scott's adaptation of Andy Weir's bestseller "Der Marsianer" is undoubtedly one of the most successful and best films of the past cinema year. The release of the blockbuster on DVD, Blu-ray and 3D Blu-ray has to be celebrated accordingly. For this reason, Twentieth Century Fox Home Entertainment and ESA - the European Space Agency - invited Twentieth Century Fox Home Entertainment to the European Satellite Control Centre (ESOC) in Darmstadt for a very special press event for the home cinema launch of the film on 18.02.2016. Before a screening of the Blu-ray of the film, we were allowed, with the support of Johann-Dietrich Wörner, ESA Director General, and Paolo Ferri, ESA Head of Mission Operations, and during a guided tour through the control centre, to get an idea of what tasks are covered here in everyday research, what challenges and problems space exploration is confronted with and, of course, how much Scott's film is anchored in reality. For Wörner, for example, it is not a question of whether, but rather when, man will travel to Mars. And Ferri, too, attests history a high degree of scientific accuracy - albeit with a few small compromises. For example, the dangers to astronauts from cosmic rays are not discussed. Even if the technical possibilities to travel to Mars are already available, such an expedition would still be a certain death sentence for the astronauts involved at the moment, as protection against this radiation is not yet guaranteed. Ways must therefore still be found to make such protection possible without, for example, a much heavier protective hull of the spacecraft requiring a multiple of fuel.

Uni-manned expeditions to Mars are therefore still the focus of ESA's current research work. For example, the next ExoMars mission, which is due to start shortly, will provide insights into where the methane in Mars' atmosphere comes from. Because, Ferri says with a wink, it is rather unlikely that this comes from cows. In two years, another ExoMars mission will be launched, which will bring a rover to the surface and send its results to Earth via the satellite sent into orbit this year. Of course, these are not the only missions that ESA will be carrying out in the near future. For example, on behalf of the EU, the Earth Observer "Sentinel 3" is sent into Earth orbit, whose images and data are hoping to provide more helpful information about the changes in the world's oceans.

However, how does such a mission actually work? What are the areas for which ESA is responsible? How can the new satellites be prevented from being damaged or even destroyed by space debris or meteorites? Why are expeditions to Mars only possible every two years? And what are the goals for the future of space research? Will we actually be able to live on the moon or even Mars at some point? These and many other questions were explained during the guided tour in an understandable, exciting and entertaining way. Anyone who is interested in experiencing this and delving deeper into the matter can book a guided tour of the ESOC in Darmstadt at Http://www.darmstadt-tourismus.de/ .

In addition to the scientific achievements and technological developments, Wörner says that an important concern of ESA is to fascinate people with such tours for space research. Especially in times of economic and world political uncertainty, it is enormously important to still have dreams and not to lose the courage to be fascinated and inspired by them. Moreover, international space research is also geopolitically important, since it contributes to international understanding. Here, many nations work closely together, even though there are disputes on the political stage, an aspect that is also very well illustrated in "The Martian".

The interesting, informative and exciting visit to ESOC ended with a screening of the film. If you are interested, you can book a guided tour or get more information on the ESA website: http://www.esa.int/ger/ESA_in_your_country/Germany