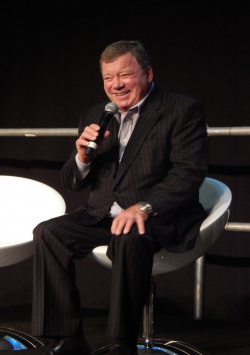 For three days, Hall 3.1 of Messe Frankfurt was transformed into the infinite vastness of space, where fans could dive deep into the STAR TREK universe. Numerous stars from the series and films honoured each other at talks, photo shoots or autograph sessions, props were exhibited in a small museum, the bridge of the Enterprise from "Next Generation" invited to sit down on the Captain's chair, there was plenty of merchandising to buy and much more. Not exactly a cheap pleasure, because almost everything cost extra in addition to the entrance fee, but for many fans a unique and therefore worthwhile investment. No question: in this respect, the weekend was a complete success, even though it left a deep hole in my wallet.

But before I go on to the beautiful, successful pages of the DESTINATION STAR TREK in Frankfurt, first a few rather critical words about the organization. Because that was a disaster, whether in advance or on site, to say the least. The staff was hard working and friendly, there is no question about that, but unfortunately in most cases they were completely uninformed. If, for example, you had bought certain tickets online and wanted to redeem them on site, you were first sent across the entire fair on the first day at least, because nobody had been informed exactly how this would work. The fact that the seating arrangement for holders of platinum, gold and silver tickets at the Opening Ceremnoy was not yet regulated was also not entirely comprehensible - but something like this can happen. What must not happen is that this mistake was not learned the next day and the chaos started all over again. The climax was reached at the big reunion of the NEXT GENERATION crew. For this, all visitors had to buy extra tickets, which were again available in various price categories. Too bad these didn't appear on the printed cards. Anyone who noticed this and who went to the information desk in advance was then given a handwritten note of the category on the card. On admission, a check was made according to lists to see who is now allowed to sit in which category. The card was then retained at the entrance. But as soon as you were sitting on your expensive place, someone came and wanted to see that card again. Really well tuned the whole thing! The fact that a chair had to be carried onto the stage shortly before the start of the reunion event because the organizers, unlike the fans, had probably not read through how many stars would be on stage before, made clear once again what a chaos must have prevailed behind the scenes. Sure, mistakes are human and in the end everything worked somehow. The only thing is that for the extremely high price of the silver, gold and platinum tickets in particular, a smoother organisation and better information for the employees on site should have been expected.

The stars, on the other hand, were exactly aware of this. It was clear to them that some of the fans travelled very far (not only visitors from all over Germany, but also from the USA, England, France, Russia, Poland, Italy and many other countries in Frankfurt) and sometimes spent a lot of money to be close to their idols for a short time. And really every one of the actors present was aware of the resulting responsibility. No matter whether it was the talks, the autograph sessions or the photo shoots, their task was to offer the visitors a great and unforgettable time - and they did the job brilliantly. Surely, especially at the photoshoots there was hardly any time for confidentiality. Especially William Shatner was handed the photo every second, so that every fan could get his expensive photo with Captain Kirk. And although it was really clear to everyone that the event was just one big money machine, as a fan you had the feeling to experience something very special in such short moments. Brent Spiner, better known as Android Data from "Next Generation", was not only a great entertainer at his talk and reunion. Even at the short moment of the photo shoot he radiated a tremendous sympathy and didn't give a fan the feeling of just being dispatched.

No question, especially the series stars are absolute convention professionals who know how to offer their fans a good time. The talk with Rene Auberjonois, Armin Shimerman, Jeffrey Combs and Casey Biggs from DEEP SPACE NINE, for example, was one of the most amusing 45 minutes of the convention along with the Brent Spiner talk. The four gentlemen answered the questions of the fans with so much wit and esprit that their short time on stage really flew by. Also Robin Curtis from the films III + IV, who had a very sympathetic and committed conversation with her fans during her autograph sessions, and one like her colleagues Alice Krige (the Borg Queen from "The First Contact") or Carolyn Seymour ("Next Generation")."/The first contact") is a perfect proof for the high professionalism of the actors and their really perceptible love for the fans - no matter if it is played very well or really real. As a visitor you never had the feeling, at least in the presence of the stars, that you were just getting the money out of your pocket.

The effort that many fans put into their costumes, the radiance in their eyes when they took a picture with their darling or got an autograph and the hearty laughter that was given to you at the talks - all this not only justified the prizes, but also made you forget the bad organisation. They were three very special days, three funny, exciting and unforgettable days. Even those who might otherwise be more of an outsider became part of a large community for a short time, were not smiled at for their passion, but were able to live it out with many like-minded people. So at the end of the day there are thanks to the organizers for bringing this event to Frankfurt and thanks to William Shatner, Brent Spiner, Karl Urban, Michael Dorn, Levar Burton, Marina Sirtis and all the other actors for giving their fans so many wonderful hours! Live long and prosper!