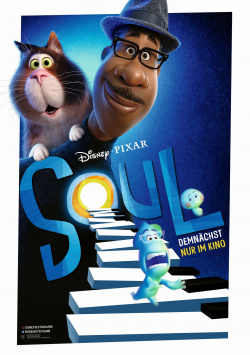 It was already foreseeable, now it is officially confirmed: With the animated film SOUL from Disney-Pixar, another film disappears from the cinema start list. However, the film will not be postponed, but goes directly to the streaming service Disney+. Here it will be exclusively available in Germany on Christmas Day, just like in the USA. In contrast to MULAN, for which subscribers also had to pay an additional fee, SOUL can be watched by all those who have subscribed to Disney+.

Only in some international markets where Disney+ is not or not yet available, the film will be exploited in cinemas, start dates for these countries will be announced. For the cinemas, the decision is another setback, but for The Walt Disney Company it is a way to make its own streaming service even more attractive: "We are thrilled to make Pixar's spectacular and touching film SOUL available to viewers directly on Disney+ in December," says Bob Chapek, CEO of The Walt Disney Company. "A new Pixar film is always special and this really warm and funny story about human relationships and how we find our place in the world is a cinematic highlight that families can now enjoy together over the Christmas holidays".

Responsible for SOUL is the visionary filmmaker Peter Docter, who was more than deservedly awarded with the Oscar® for his films EVERYTHING STANDS HEAD and ABOVE. Together with his co-director and author Kemp Power, who previously wrote the screenplay for "One Night in Miami", Docter has created a film that critics are already celebrating as one of the best Pixar films in years. It's all the sadder that this work doesn't make it into the cinema worldwide. What Docter says about the film fits in very well:

"The world can be an exhausting and frustrating place - but it is also full of unexpected joys, even in obviously banal things," says Docter, who is also Chief Creative Officer of Pixar Animation Studios. "SOUL raises the question of what is really important in our lives, a question we are all probably asking ourselves right now. I hope the film will bring some joy and pleasure to the viewers at a time when we can all use it."

The market situation of the last six months, due to the pandemic, is very difficult in many ways, but it also offers new opportunities for innovation in the approach to content exploitation. With over 60 million subscribers in its first year since launch, Disney+ is an ideal platform for families and fans to enjoy this unique Pixar film at home. The German theatrical release was scheduled for November 26th, SOUL was in the official selection at the Cannes Film Festival in May this year and will be screened at numerous other festivals.

Although it is nice that the film will be released this year, it would have been important for our cinemas to be able to show a potential audience favourite. Let's hope that such announcements remain an exception and don't become the rule.

And that's what "Soul" is all about: </What makes us human? How do we ... "We"? Well, the slightly chaotic and obstinate soul named 22 does not ask himself these questions. She doesn't like the personalities or interests that people receive before they arrive on earth. And in general she wants to have relatively little to do with all this earth stuff. Until one day she meets Joe Gardner. Due to a stupid mishap, the aspiring jazz musician lands just a few hours before his big performance at a fantastic, mystical place where all souls are before they come to earth. From then on he has to deal with the nine-smart 22 at his side, who has never understood what is supposed to be so great about this human life. While Joe desperately tries to show 22 how great it is to be human, the two stumble from one mess to the next.</p>