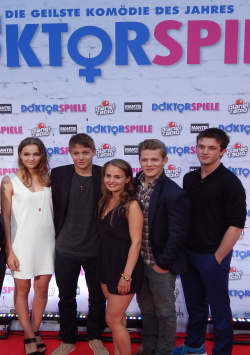 Last summer director Marco Petry ("Schule") shot the cheeky teen comedy "Doktorspiele" based on the novel by Jaromir Konecny in Frankfurt and the surrounding area. The book caused a sensation with its very direct language. And even the film doesn't exactly get to the point. The actors seem to have really enjoyed this, though, because they clearly show a certain playfulness. In any case, the cast is one of the great strengths of the comedy. In addition to leading actor Merlin Rose, who was seen in a small supporting role in "Feuchtgebiete" in 2013, Petry was also able to see the coveted young stars Maximilian von der Groeben ("Fack Ju Göhte") and the young "Fack Ju Göhte". and Jannis Niewöhner ("Ruby Red", "Sapphire Blue"), as well as the talented young actresses Lisa Vicari ("Hell") and Olga von Luckwald ("A Man, a Fjord"). With his five young talents, director Marco Petry also came back to Frankfurt for the big German premiere to present the finished work to a large audience for the first time in the CineStar Metropolis.

However, before it went to the cinema, the guests had to cross the red carpet, past screaming fans and the press. Then we had to sign autographs, pose for photos and answer questions. In addition to the actors and the makers, singer Mateo, who contributed the title song to the film, as well as former DSDS winner Daniel Schuhmacher and pop star winner Evy also took part in this procedure. There was really something like a real premiere feeling in Frankfurt - something that film fans in the Main metropolis are unfortunately allowed to experience far too rarely.

In the cinema there was a short speech by the producers. Boris Rhein, Hesse's Minister of Science and Culture, and City Councillor Markus Frank also took the opportunity to express their delight at the fact that more and more filmmakers are discovering Hessen and especially Frankfurt as a film location for themselves. No wonder, since "Doktorspiele" shows again how well the Frankfurt skyline is suitable as a film backdrop. After the film, to the enthusiastic applause of the audience, all present members of the film team and the actors came on stage, whereby especially Marco Petry was visibly pleased about the reaction of the guests to his work.

Whether "Doktorspiele" was just as well received by the cinema audience, will show itself from 28.08. onwards. Then the comedy will not only be shown in Frankfurt's cinemas.

More pictures from the premiere can be found HER