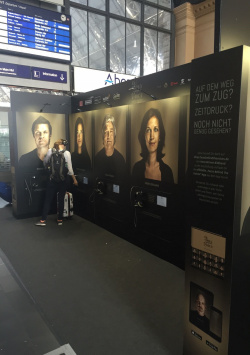 Faces behind the Voices

Do you know Gerrit Schmidt-Foss? Or Martin Kessler? Maybe Katrin Fröhlich? No? I guarantee you know these people - or at least their voices. Because they are among the most famous dubbing actors in Germany who lend their voices to Hollywood stars such as Leonardo DiCaprio, Nicholas Cage or Cameron Diaz. Her work is not only about translating texts into German. They must also capture and nuance adapt the character of the actors they synchronize. This is a special challenge when a speaker synchronizes very different roles, which the viewer should not notice if possible. Because it can be a little irritating when you realize that Bart Simpson and Oscar winner Hillary Swank or Leonardo DiCaprio and Sheldon Cooper have the same German voice. The fact that this works so well is due to the outstanding work of the people you never actually see.

The Berlin photographer Marco Justus Schöler fetches the dubbing actors from the dark speaker booths in the multimedia exhibition FACES BEHIND THE VOICES and focuses on them. He has captured their faces in fascinating portraits, which now also stop at Frankfurt Central Station on their journey through various large railway stations. In addition to the large-format images, the visitor has the opportunity to listen to tablets of language examples in order to guess which well-known voice is behind the portrayed speakers.

Finally, the partly outstanding work of the people is appreciated, who otherwise always stand in the shadow of the big stars or whose work is even demonized by dubbing opponents. The fact that good dubbing is an art that is also closely related to the quality of the speakers is too often forgotten - or taken for granted. But in this exhibition and the accompanying illustrated book, the voices are the big stars - and that's exactly why a visit to the exhibition at Frankfurt Hauptbahnhof can only be warmly recommended!

The exhibition book can be ordered HERE.