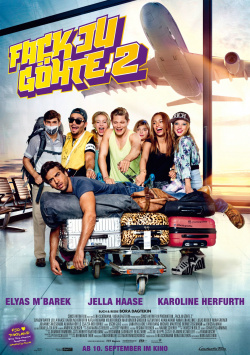 Ab from September 10, he is back - the coolest teacher in the world! Zeki Müller alias Elyas M'Barek and his "weak mates" from 10b go on a class trip to Thailand in FACK JU GÖHTE 2 and again deliver a dazzling spectrum of social incompetence.

Content: Everyone loves Haudrauf teacher Zeki Müller (Elyas M'Barek), but he is annoyed by his new job at the Goethe Comprehensive School: getting up early, rebellious pupils and this constant correction! To top it all off, Power Director Gerster (Katja Riemann) wants to out-boot the old-language competition and snatch the Thai partner school from the Schillergymnasium. Their dream: to enhance the image of the Goethe Comprehensive School in order to become the flagship of the new campaign of the Ministry of Education.

Nothing lies Zeki further than to go on an international class trip with his monster students, but when a surprisingly remnant of his prey lands in a donation container to Thailand due to an accident by Lisi Schnabelstedt (Karoline Herfurth), he has no other choice: He has to get back his diamonds hidden in a cuddly toy. Müller volunteers for a school trip to a Thai coastal coffee shop. In Southeast Asia, Chantal (Jella Haase), Zeynep (Gizem Emre), Danger (Max von der Groeben) & Co are all just starting to open up. And as if Zeki didn't have enough to do with the wild teacher-student war, a merciless competition with the elitist Schillergymnasium and its snobbish super-pedagogue Hauke Wölki (Volker Bruch), who has only one goal, breaks out: To end Müller's career!

More info on the film: