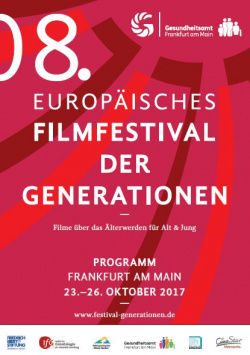 Film ab for the Film Festival of Generations

Giving great love a chance even in old age, following in the footsteps of lost childhood to Istanbul or daring to jump in the deep water for the first time in life - these are some of the topics at the European Film Festival of Generations. The festival will take place from Monday, 23rd to Thursday, 26th October, at the CineStar Metropolis cinema on Eschenheimer Turm.

"With the film festival, we want to encourage young and old to think together about getting older and to look for new images of old age that also make the chances of old age clear," says Stefan Majer, head of the health department.

Organized by the Frankfurt Health Authority, the festival is intended to support the exchange between young and old film friends and to promote dialogue between the generations in joint film discussions.

There are also prominent guests like the actress Suzanne von Borsody. She presents the graduation film "Leanders letzte Reise". During an adventurous road trip to the Ukraine she tries to bring back her daughter Adele and also her frail father - wonderfully played by Jürgen Prochnow - safe and sound every now and then as a stressed restaurant owner.

At the opening on Monday, October 23, at 6.30 p.m., director Britta Wauer and 90-year-old lead actor William Wolff from London will come to the film talk with the documentary "Rabbi Wolff".

This also shows a selection of award-winning short films. The current winners of the German Generation Film Award 2017 Phan Thieu Hoa Nguyen and Arkadij Khaet will present their works in person in a school presentation on Tuesday, 24 October at 10.30 a.m. Some of the films cost 6,50 Euro admission, some can be visited free of charge. Information and the detailed festival programme can be found at the Health Department on telephone: 069/212-34502 and on the Internet at http://www.frankfurt.de/gesundheit-im-alter