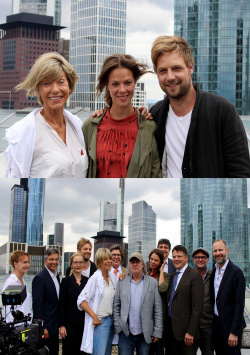 Filming over the rooftops of Frankfurt

Frankfurt increasingly offers the perfect backdrop for large cinema productions. Thus the skyline of the Main metropolis has been seen in recent years in such diverse films as "What a Man", "Doktorspiele", "Ein Atem" or "Hin und Weg". And even New York was able to double Frankfurt convincingly in the satire "Iron Sky". Now Frankfurt has again been chosen as the film location. Based on the bestseller of the same name by Kerstin Gier, DAS GRAS VIEL GRÜNER is being created at locations in the city and other locations in Hesse just AUF DER ANDEREN SEITE IST. And this is what the film, which is scheduled for release in 2017, is all about:

Kati (Jessica Schwarz) and her husband Felix (Felix Klare) have had a happy relationship for five years, but everyday life is slowly creeping in. When the stunningly attractive Mathias (Christoph Letkowski) crosses her path, this changes abruptly. Kati falls head over heels in love and begins to doubt Felix and their future together.

And then what happens is what everyone has thought about: How about turning back time to see if what you don't have would have been more appealing? Kati wakes up one day exactly five years earlier, the day before she first met Felix. Thus, Kati surprisingly gets her second chance from fate in search of true love.

Although there wasn't much to see, of course, this visit on the set made you want to see the film, which is not only guaranteed to score with the great scenery of the Frankfurt skyline. Finally this magical-romantic comedy is also in the supporting roles with Elena Uhlig ("Unter Frauen", "Alles auf Zucker"), Pheline Roggan ("Russendisko", "Soulkitchen"), Juliane Köhler ("Schoßgebete"), "The Downfall"), Milan Peschel ("The Nanny", "Rubbeldiekatz"), Adnan Maral ("Turkish for Beginners", "Once Hans with Hot Sauce") and Oliver Korittke ("How Men Talk about Women") are all cast with absolute prominence. We are looking forward to NFP* neue film produktion GmbH in co-production with ARD Degeto bringing the 2017 film to the cinemas!