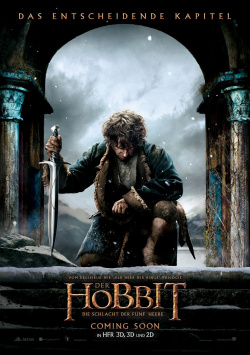 First teaser trailer for THE HIGHBIT: THE BATTLE OF THE FIVE HEARTS

In the furious graduation film of the trilogy the responsibility for the future of Middle-earth rests on the shoulders of Bilbo Baggins and his friends. The epochal Battle of the Five Armies will decide their fate.

The Oscar® award-winning filmmaker Peter Jackson presents "The Hobbit: The Battle of the Five Armies", the closing film to the trilogy version of the still very popular masterpiece The Hobbit by J.R.R. Tolkien.

"The Hobbit: The Battle of the Five Armies" shows the epic finale of the adventures of Bilbo Baggins, Thorin Oakshield and the Dwarves. When the companions reclaim their homeland from the dragon Smaug, they suddenly unleash its destructive power: Angry Smaug spits his fiery anger on the defenseless men, women and children of Seestadt.

Thorin is obsessed with his urge to protect the recaptured treasure - in return he even risks friendship and honor, while Bilbo desperately tries to teach him reason. Soon the Hobbit will have to make a very volatile decision. But even greater dangers are imminent for the companions. For only the wizard Gandalf realizes that Sauron's formidable enemy has set his orc legions on march to attack the Lone Mountain in a surprising manner.

When the conflict intensifies and darkness falls, the races of dwarves, elves and humans are faced with the choice: either fight together or perish. In the epochal Battle of the Five Armies, Bilbo puts his life at risk for that of his friends: The future of Middle-earth is at stake.

The "Hobbit" trilogy tells a coherent story in Middle-earth 60 years before "The Lord of the Rings", which Oscar winner and filmmaker Peter Jackson and his team brought to the cinema as a blockbuster trilogy. The highlight was the Oscar-winning "The Lord of the Rings - The Return of the King".

The script for "The Hobbit: The Battle of the Five Armies" was written by Fran Walsh & Philippa Boyens & Peter Jackson & Guillermo del Toro based on the novel by J.R.R. Tolkien. The film was produced by Peter Jackson together with Carolynne Cunningham, Zane Weiner and Fran Walsh. Executive Producers include Alan Horn, Toby Emmerich, Ken Kamins and Carolyn Blackwood, Philippa Boyens and Eileen Moran. The creative team includes cameraman Andrew Lesnie, production designer Dan Hennah, editor Jabez Olssen and composer Howard Shore. The costumes are designed by Richard Taylor, Bob Buck and Ann Maskrey. Taylor is also responsible for the design and manufacture of the weapons, armor and special mythical creature masks, which will again be manufactured in the award-winning Weta Workshop. The Oscar-winning visual effects studio Weta Digital under the direction of Joe Letteri designs the visual effects for the film. Peter Swords King is responsible for make-up and hairstyles. Alan Lee and John Howe are involved as concept designers. Eric Saindon is in charge of the visual effects. David Clayton is in charge of the animation.

The Hobbit: The Battle of the Five Armies was shot in 3D at 48 frames per second under Jackson's direction and is then shown in selected cinemas in High Frame Rate 3D (HFR 3D) format as well as in other 2D and 3D formats and in IMAX® cinemas. The film was produced in Jackson's own studio in Miramar/Wellington and at locations in New Zealand. The final production took place at Park Road Post Production in Wellington.

Warner Bros. Pictures is responsible for distribution worldwide, with MGM managing distribution in certain countries and all international television licenses.

Kino Trailer zum Film "First teaser trailer for THE HIGHBIT: THE BATTLE OF THE FIVE HEARTS "
Loading the player ...