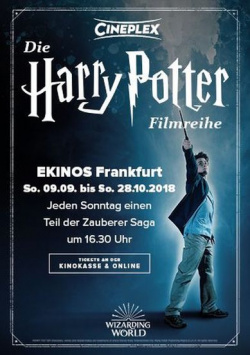 Hard to believe, but true: It's been 17 years since the first HARRY POTTER movie came to our cinemas and 7 years since we had to say goodbye to our dearest student. But fans don't have to do without the magical world, because this year the second part of J. K. Rowling's PHANTASTIC ANIMAL BEING will be released in our cinemas. And in this second part the spectators return to Hogwarts and get to know a young Dumbledore. This is going to be a party for all Potter fans!

To get you in the mood for this cinema event, the Frankfurt EKINOS are showing a film series of a special kind: The HARRY POTTER film series

From 9 September to 28 October 2018, one of the most successful film series of all time will once again return to the big screen. The EKINOS show a film in chronological order on Sundays at 4.30 pm. Look forward to seeing Harry, Hermione, Ron, Draco, Neville, Hagrid, the Hogwarts professors and the one whose name may not be mentioned again.

Before every performance there will be a raffle with special surprises.

The ticket price is 6 Euro. Reduced tickets for pupils cost 5 Euro. When you buy tickets for all eight performances at the box office, the total price is reduced by 4 euros. The advance sale has begun.

Further information can be found at Www.ekinos-frankfurt.de