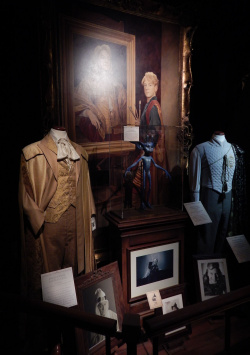 Harry Potter: The Exhibition - Finally back in Germany

True HARRY POTTER fans should definitely plan a short break in Potsdam in the next few months. Since 13. October 2018 Harry Potter: The Exhibition finally stops here in Germany again. Having already attracted more than three million visitors in cities such as Cologne, New York, Toronto, Sydney, Tokyo and Singapore, the exhibition can now be seen in Europe for the second time after Sweden. In 25 containers many original props and costumes from the films, all on loan from Warner Bros. Entertainment, were brought to the Caligari Hall at Filmpark Babelsberg, where a truly wonderful exhibition experience was conjured up.

After the visitors were allowed to pose with scarf and magic wand for a souvenir photo, they were received by the speaking hat and assigned to one of the houses of Hogwarts. Afterwards we go to a small pre-show, in which the visitors are prepared for the exhibition with a few excerpts from the films. At the end of this presentation, the door opens and we pass a neighbour of the Hogwarts Express and enter the first exhibition room. There are now seven more sets (Gryffindor Community Room, Classroom, Quidditch, Hagrid's Hut, The Forbidden Forest, Dark Arts, The Great Hall) where fans will never be amazed again. You may know the exhibits from the films, perhaps also from the accompanying books or the bonus material of the DVDs and Blu-rays. But only when you stand directly in front of the many props and costumes, you can really see how much love for detail everyone involved has put into the film adaptations of J.K. Rowling's bestsellers.

It is precisely this attention to detail that enables viewers to immerse themselves in this very special world again and again while watching the films. And also in the exhibition this succeeds quite wonderfully. Here, too, there are small details, like the vibrating dragon egg in Hagrid's hut, which give you a real Harry Potter feeling as you walk through the exhibition. It is simply fun to marvel at the many small and large things that are exhibited here and sometimes discover completely new sides to them that may have remained hidden in the film. That's why it's definitely worth walking through the exhibition with an audio guide, as the numerous contributions still reveal things - such as Professor Trelawney's Magic Ball - that would otherwise remain hidden even on closer inspection.

Both the Philosopher's Stone, Lord Voldemort's cloak, Harry's Nimbus 2000, the Golden Schnatz, the map of the Rumtreiber, a model of Dobby the house-elf, the Horcruxes, the Hippogriff Seidenschnabel, a Dementor or cloaks and masks of the Death Eaters - fans won't be able to get out of their amazement and will carry the joyful grin on their faces for a long time to come. Of course, there are also some small points of criticism. So at the end of the exhibition, which comes much too fast, one wishes for even more scenery (such as the Weasley brothers' shop or Harry Potter's room with the Dursleys). Also more interactive stations would have been nice especially in view of the many younger visitors. You can try your hand at Quidditch, sit on Hagrid's chair or harvest young, screeching mandrake. But there should have been more of such offers. Nevertheless: despite smaller deductions of points, this really beautifully designed exhibition is a real festival for fans and also very interesting for film lovers in general. (The description refers to a visit to this exhibition in Cologne)

Admittedly, for a visit to the exhibition one has to dig a little deeper into one's pockets, especially as a non-Potsdamer. The entrance fees (from 14,50 €) and possibly the purchase of numerous merchandising articles such as souvenir photos or the beautiful, really worth reading and seeing catalogue for the exhibition will be added to the journey. Of course, that's a lot of money, no question about it. But those who love the world of Harry Potter will definitely find the time and financial expenditure worthwhile.

The exhibition will be open daily from 10 a.m. to 6 p.m. on Thursdays, Fridays and Saturdays from 10 a.m. to 7 p.m. from 13 October 2018. Last admission takes place one hour before the end of opening hours.

All further information can be found at: https://www.harrypotterexhibition.de/