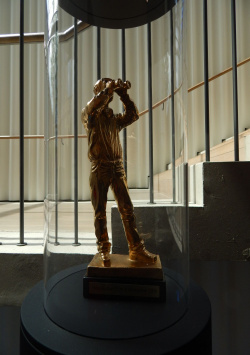 
Special opening hours Open Film Studio in the summer holidays:
In addition to the weekend also open on Fridays

THE TREASURE OF WHITE HALKS
Germany 2005 R: Christian Zübert
D: David Bode, Kevin Köppe, Tamino-Turgay to the field. 92 min. 35mm. Recommended from 8 years of age
This is the last big holiday Jan spends in his home village Heroldsbach before moving to Düsseldorf with his parents. Together with his friends Stevie and Basti he tries to solve the mystery of the "White Falcons", a legendary gang of children whose leader Peter mysteriously disappeared.

RICO, OSKAR AND THE HEART BREAKER
Germany 2015 R: Wolfgang Groos
D: Anton Petzold, Juri Winkler, Karoline Herfurth. 95 min. DCP. Recommended from the age of 8
Rico and Oskar start their summer holidays together: Oskar temporarily moves in with Rico and his mother Tanja - and numerous new adventures are already on the horizon: What does Tanja have to do with the team of criminals who seem to cheat at the weekly bingo events? Is she a victim of blackmail? And then there are the Kessler twins after Rico and Oskar!

KÄPT'N SÄBELZAHN AND THE treasure of LAMA RAMA
Norway 2014 R: John A. Andersen, Lisa M. Gamlem
D: KyrreHaugen Sydness, Vinjar Pettersen. 97 minutes DCP. Recommended from 8 y.
As a foundling eleven-year-old Pinky was fished out of the water. That's where he's going back as a pirate under captain's sword tooth! And then it's finally time: On board the "Dark Lady" we head for Lama Rama, a legendary country. Fortunately, Pinky's girlfriend Raven travels as a stowaway, and even a little monkey turns out to be a faithful companion. With all the adventures Pinky expects in Lama Rama, this company is worth its weight in gold - and even more!

Once sitting next to Forrest Gump on a bench and eating chocolates? Or fly over Frankfurt with a flying carpet? This and much more is possible in the museum's Bluebox, which is open to all visitors on the weekend afternoons from 2 p.m. to 6 p.m. and is also open on Fridays from 2 p.m. to 6 p.m. during the summer holidays (27 July to 4 September).

All further information is available at: www.deutsches-filmmuseum.de