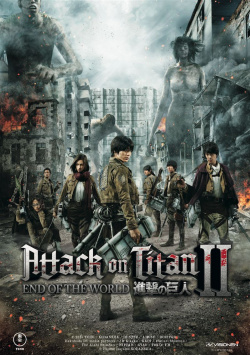 KAZÉ shows 28. March 2017 in an Austrian and nationwide Anime Night the continuation of the spectacular real film two-parter "Attack on Titan II - End of the World" in German dubbed version.

In Frankfurt the film will be shown on March 28 at CineStar Metropolis (at 8 pm).

The youthful fighter Eren is pilloried. Human or Titan? What is he now? That's what the military tribunal wants to know from him. Finally, in the last great battle, he had turned himself into a titan after being swallowed alive by one of the giants. Already the death sentence against the alleged Titan Eren is to be executed by shooting order, then one of the dangerous giants appears out of nowhere. The intelligent monster kidnaps Eren! His adoptive sister Mikasa is devastated. Together with her friends, she sets off for the damaged outer wall that surrounds her city as a bulwark against the Titans. The mission: They finally want to plug the hole in the rampart. It's a dangerous task, because there are titans everywhere. Meanwhile Eren finds himself in a strangely futuristic room. He may have survived. But what the rebel commander Shikishima now reveals to him about the origin of the Titans exceeds all his expectations.

What does it look like when monstrous Titans break out of the comic and become reality in the real film? This disturbing vision has brought the team around the Japanese director Shinji Higuchi to the screen. Part 1 of the two-parter "Attack on Titan" stormed directly to number one of the cinema charts in Japan, and fans in Germany also celebrated the impressive science fiction film. Now the label KAZÉ shows the continuation of the apocalyptic saga in their Anime Night on 28 March 2017: the action thriller "Attack on Titan II - End of the World".

The epic about the protagonists Eren (Yûki Kaji), Mikasa (Yui Ishikawa), and their friends Armin (Kanata Hong&).ocirc;), Sasha (Nanami Sakuraba) and Hange Zoë (Satomi Ishihara) belongs to the genre of 'kaijû eiga' (monster films). The monsters in the dark visions are mostly human-like creatures that threaten the planet Earth. Among the most famous films of this genre are classics like "Godzilla" or "King Kong". Moviegoers who want to get really creepy like to be impressed by the overwhelming aesthetics, which are mostly expressed in the "kaijû eiga" with bombastic special effects: Powerful screen stories, such as the two-parter "Attack on Titan", are therefore among the most popular cinema spectacles of Japanese pop culture and have long since caused a sensation beyond national borders.

You can find all further information at https://www.kaze-online.en/attack-on-titan/