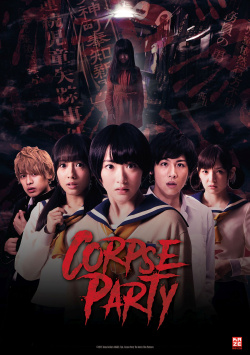 On August 3rd KAZÉ will show the live action realization of the horror movie "Corpse Party" at the Asia Nights in Germany and Austria.

The friendship ritual of the "happy Sachiko" should actually ensure that Ayumi and her friends remain friends forever. But instead, something terrible has happened: they seem to have slipped into a kind of parallel world. Soon they realize that it's an enchanted school from the past where a series of horrible crimes took place.

Now it's about uncovering the truth to escape the souls of those who died there and find a way home!

As anime scary enough, the horror becomes even more alive in the real film version of Corpse Party. The screams of the girls let the blood freeze in your veins.

Like the anime, the real film is also based on the first part of the successful gaming series "Corpse Party: Blood Covered". The manga realization was published in German by Egmont Verlag.

The realization as a real film took place in 2015.

The Japanese stars Rina Ikoma as Naomi Nakashima and Nozomi Maeda as Ayumi Shinozaki could be won as actresses.

"Corpse Party" will be released on DVD and Blu-ray on 28 September.

The film will be shown on 03. August in Frankfurt im