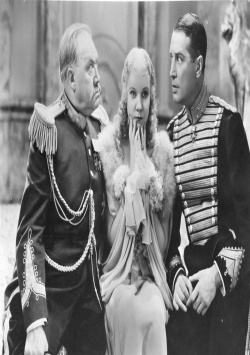 Ernst Lubitsch and his films is the focus of the Lecture & Film series, which includes lectures by experts and an accompanying thematic programme until July 2017 at the Deutsches Filmmuseum.

Thursday, 9th day February, 20:15 o'clock
Champagne mood with safety distance Lubitsch's film operettas
Lecture by René Michaelsen
<x>BR</Filmed operettas belong to the basic stock of early cinema and Ernst Lubitsch in particular repeatedly uses operettas as models in both his silent and his sound films. As a stage genre, however, the operetta follows a quite specific performative framework, which does not automatically comply with the needs of the medium of film: She realizes herself scenically and musically with the inclusion of a sphere of ironic distance and self-disclosure that opera and musical do not necessarily have at their disposal. The lecture will focus on Lubitsch's film adaptation of Franz Leh&aacute;rs &sbquo;Die lustige Witwe' (The Merry Widow) in order to investigate from there how Lubitsch adapts the specific illusion agreement of the operetta in his films and to what extent the operetta possibly qualifies itself as a blueprint of the famous Lubitsch Touch.

Ren&eacute; Michaelsen did his doctorate on the self-reflexiveness of Robert Schumann's music. Since 2016 he has been dramaturge at the Theater im Bauturm in Cologne. In his publications he devoted himself to Jacques Offenbach, Richard Wagner, Siegfried Kracauer and "Tintin and Struppi.<br />
Start of film: approx. 21:15
THE MERRY WIDOW
USA 1934. R: Ernst Lubitsch. D: Maurice Chevalier, Jeanette MacDonald, Edward Everett Horton. 99 min 35mm. OF
The fictitious dwarf state of Marshovia is on the verge of ruin. Only the rich widow Sonia would be able to fill the empty state coffers. But the country's biggest taxpayer to date has emigrated to Paris. In his desperation, the king orders the womanizer Count Danilo to travel to Paris: He shall conquer Sonia's heart, marry her and bring her back to her homeland. The plan seems to work. Unfortunately, however, the young woman gets wind of the royal plan with devastating consequences for Danilo. THE MERRY WIDOW was awarded the Oscar® for Best Production Design in 1935.

Entrance Free! A reservation is recommended.

Saturday, 11 February, 18h; Wednesday, 15h. February, 18h
THE THREE FROM THE TANKSTELLE
Germany 1930. R: Wilhelm Thiele
D: Lilian Harvey, Willy Fritsch, Heinz Rühmann. 99 min. 35mm
World economic crisis 1930: The three friends Willy, Kurt and Hans return from a three-month journey. Arriving home, they are surprised to find that they are almost broke. The rest of the money is just enough to set up a joint petrol station. But then all three fall in love with their best customer, the rich and young Lilian Coßmann. Singing and dancing, they flirt in competition. DIE DREI VON DER TANKSTELLE was a crowd-puller, the hit "Ein Freund, ein guter Freund wurde zum Hit. The film paved the way for the dream couple Willy Fritsch/Lilian Harvey's career.

In 1930 the leading actors Max Hansen and Paul Morgan were regarded as stars of the Berlin cabaret scene, who appeared in the 1920s in the self-founded "Kabarett der Komiker" as well as in their own Berlin theatre. With THE CABINET OF THE DR. LARIFARI, they created an anarchic-self-ironic parody of filmmaking during the Weimar Republic. In the film the two are broke and therefore found a production company. Immediately they start working on their first film, but without having a suitable script. As the shooting begins, the carefree producers create complete chaos in the studio.

STUMMFILM-MATINÉE on Sunday, 19 February. February, 18h
THE EYES OF THE MUMIE MÂ
Germany 1918. R: Ernst Lubitsch
D: Pola Negri, Emil Jannings, Harry Liedtke. 58 min. 35mm. Dt. ZT
On a journey through the Orient the painter Alfred Wendland wants to look at the grave of the mummy Mâ. He searches in vain for a local expert to take him there, finally sets off alone and meets the guard Radu in the burial chamber, who has a beautiful Egyptian woman hidden there. The young woman looks deceptively like Mâ. Wendland succeeds in saving the young woman and bringing her to Europe, where she performs as a dancer. But the revenge of the Pharaohs is not long in coming.
Piano accompaniment:  Uwe Oberg
Vorfilm: EBERT BEI ANNA BOLEYN, Wochenschau excerpt. DE 1920. 2 min. 35mm

Wednesday, 22. February, 18h
MORITZ MAKES BE HAPPY
Germany 1931 R: Jaap Speyer
D: Viktor Schwanneke, Willy Prager, Siegfried Arno. 85 min. 35mm
Moritz Meier, protagonist of the film, is an apprentice in a Berlin fashion store and falls in love with the mannequin Lisa to the ears of both, who doesn't appreciate him at all. When the rumor begins that he is heir to millions, the situation changes. The parallels to Ernst Lubitsch are obvious: Jaap Speyer delivers an unleashed mix-up comedy with quirky humour and fast hits, in which Siegfried Arno parodies Al Jolson, the leading actor of the first sound film THE JAZZ SINGER (US 1927, R: Alan Crosland), with a gramophone strapped to his back.

A series of events organised by the German Film Museum, the Institute for Theatre, Film and Media Studies at Goethe University and the Cluster of Excellence "Die Herausbildung normativer Ordnungen im Rahmen der hessischen Film- und Medienakademie (hFMA), with financial support from the Association of Friends and Sponsors of Goethe University and the Cultural Office of the City of Frankfurt.