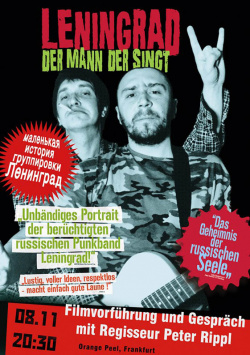 Peter Rippl tries to fathom the fascination of Leningrad in his stirring music documentary. Leningrad is like a porn film: Shnur says of the group that it uses the smallest possible means to evoke the greatest possible emotions and thus expresses everything. He looks as if he is still wondering about the huge success of the band. Rippl accompanies the band on their tour in a classical way, talks to fans and companions and shows all those who think of Russia only as the usual Cossack and Vodka clichés that there is also an overflowing creative underground scene there, which hardly differs from the rest of Europe. Only that the everyday slang that Shnur uses in his lyrics is often difficult to translate, which is why the subtitles for the lyrics sometimes only show dots.
In the West they knew only a few, but in Russia they were celebrated: the ska punk band "Leningrad" with its charismatic founder and frontman Sergej Shnurov, called "Shnur". Frankfurt filmmaker Peter Rippl has made a powerful documentary and music film about the popular underground band that created its own style with its use of Russian folklore. Peter Rippl asks about the reasons for the success and at the same time transports the astonishing energy that the band radiated on stage.

You see pictures that are actually rare in television reports: Roaring masses, half-naked and sweaty, stomping, bobbing and headbanging to the music of "Leningrad" in St. Petersburg clubs or outdoors. This music mixes just about everything from Balkan folk, Mediterranean chanson, Russian Estraden romances, Latin jazz and reggae to a snot rock that stands proud with dirt. The texts deal with sufficiency, drugs and other possibilities of self-destruction. "Kredit" rhymes with "Bandit", one title is "Fauler Sack", a nice line "Nee, I don't celebrate my birthday because it pisses me off", and also the neurussian word "Maserfakker" occurs quite often.