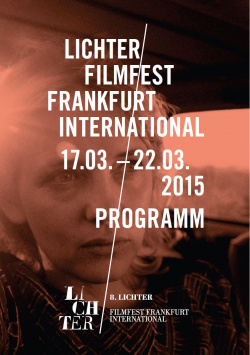 On Tuesday, 17.03., the 8th LICHTER Filmfest Frankfurt International is finally back on track. The small, regional festival has long since become a nationally significant film festival, which not only the public but also filmmakers enjoy attending. The success of the LICHTER Filmfest is primarily due to the enormous lifeblood that the makers invest year after year in the implementation. Driven by their love of cinema, film and the region, they have been putting together an extremely varied programme between high standards and entertainment for eight years now, which often provides a platform for smaller, less commercial films. This year, more than 50 films from 15 countries will be shown in seven venues in Frankfurt, Wiesbaden and Offenbach. Among them are three world premieres, seven German premieres and seven Hesse premieres - more world premieres than ever before.

This year the Festival Centre has found a new home in the legendary Cantate Saal next to the Goethehaus. The theatre space, which used to be a cinema itself, will become a venue, as will the interspaces or the inner courtyard, where there will be a cinematic installation, among other things. There will also be a jazz concert in the festival centre and many other attractive offers. In comparison to the Vau office tower used as a backdrop in numerous films, in which the festival has been housed for the past two years, it is a somewhat more intimate meeting place which, however, absolutely does justice to the character of the festival. In addition, the location, in conjunction with the supporting programme, strengthens the festival's presence in the city, which will certainly further increase its already high popularity.

The festival will be opened by the winner of the Hessian Film Prize 2014, filmed in Frankfurt, the drama "Hedi Schneider steckt fest" (Hedi Schneider is stuck), which impressively portrays the effects of a mental illness on an otherwise healthy family world. The documentary film "Carlo, Keep Swingin`", which will be shown on Wednesday in the Cantate Saal, is not only a rousing portrait of the musician Carlo Bohländer, but also a fascinating contemporary document on the significance of jazz for Frankfurt. Another highlight is the satire "Welcome to Karastan", of which some interior scenes were staged in Frankfurt (in Orfeo's Erben). Even if the story about a British filmmaker (Matthew Macfadyen), who is to make a propaganda film for the Republic of Karastan, would have done a little more good, this Hessen premiere is absolutely worth seeing. The same also applies to the two dramas "Hin und Weg" and "Im Labyrinth des Schweigens", which unfortunately did not have the success they deserved in the cinema.

Fitting to the financial capital Frankfurt and well suited to the opening of the new ECB headquarters, the overarching theme for this year's international contributions is "money". The 15 international contributions deal with this topic in very different ways, thereby creating discourses and stimulating discussion, which is of course almost perfect within the framework of a festival. One of the particularly interesting contributions should be the Greek drama "2A Blast". From a purely cinematic point of view, the drama with its not always comprehensible use of explicit sex scenes and shrill arguments of the protagonists will certainly not only arouse enthusiasm. However, the film's subject matter certainly provides a good basis for heated conversations following the screening. A good example of the festival's versatility is the Latvian horror film "The Man in the Orange Jacket", which is shown in the cinema of the German Film Museum. The drama "Stray Dogs" from Taiwan and the documentary "The Queen of Versailles" are also among the highlights of the international feature films, which also come from Congo, Austria, Africa and Brazil. Whether drama, documentary, tragedy, horror or experimental film - there's something for everyone's taste here.

In addition to the popular short films, there are also medium-length documentaries and feature films this year for the first time, which will be shown on Thursday from 8 p.m. in the "Mittelangen Nacht". And of course the LICHTER Art Award should not be missing this year. The five entries, selected by the jury from 120 entries from all over the world, will be shown in a video art exhibition during the festival. In addition, thirteen feature-length films and 27 short films from the region compete for the coveted white Bembel. And also the extensive accompanying programme with various film lectures, talks, performances and experimental formats make this year's LICHTER Filmfest once again an exciting, interesting, entertaining and surprising event, which also reflects the constantly growing importance of Hessen's film region and Frankfurt as a film city.

The entire film programme and all further information on the festival, the venues, admission prices and the supporting programme is available at http://www.lichter-filmfest.de/