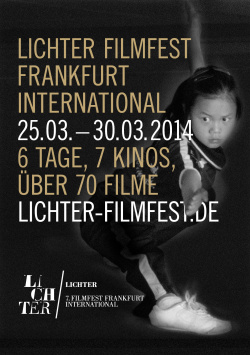 humor, comedy and comedy: LICHTER fathoms out the laughter

The one of 25. The seventh edition of the LICHTER Filmfest Frankfurt International, which will run until March 30, 2014, will focus on "Humour, Comedy and Comedy". "Laughter is an inseparable part of cinema right from the start" are the reasons given by the three festival makers Gregor Maria Schubert, Johanna Süß and Michael Hack for their choice: "With this theme, we can put together an entertaining and varied film programme and at the same time get to the bottom of a fundamental human emotion."

For the third time, the Frankfurt Festival will present a thematically oriented, international programme alongside the traditional competition for the best film from Rhine-Main. It comprises around a dozen current films from all parts of the world. The programme is supplemented by selected film classics and an extensive supporting programme. The interplay of these elements will answer some basic questions about humour and comedy: When and why do people laugh, what explains the sometimes considerable differences in humour between countries and regions and what distinguishes humour in films from that on stage or in texts?

Three German premieres of independent films can be found among the first titles for the international programme. Two of them come from the house of the innovative Parisian production company Ecce and had their premiere in Cannes. Antonin Peretjatko's "La fille du 14 juillet" tells the story of the turbulence experienced by a group of friends on their way to the sea as they learn that the government has cancelled the holiday month of August because of the crisis. "Les Coquillettes" by Sophie Letourneur, which LICHTER previewed at the B3 Biennale des Bewegten Bildes, reports on the romantic confusion of four young filmmakers at the Locarno Festival. Robert Byington's "Somebody up there likes me" from the USA is a somewhat more silent film, which deals with the strange life of a young man who staggers through his life, but strangely doesn't age a day at all.

"Especially the independent film often has a hard time with comedies", the festival organizers state. But films like Les Coquillettes, a small film produced with little money by a young director, show that there are other ways. The programme of the LICHTER Filmfest will therefore cover all countries and genres when researching the state of cinematographic humour. "It's about placing blockbusters next to art films, newcomers next to old masters, Asian next to American or European cinema," according to the organizers' credo.

That's why part of the festival will also be a reference to local humour traditions. "As the seat of the New Frankfurt School, Frankfurt is a kind of secret humour capital of Germany," Schubert, Süß and Hack are convinced. This is why the Caricatura - Museum für komische Kunst, among others, is one of the cooperation partners for the supporting programme.

Alongside the international programme, regional film continues to be the focus of the LICHTER Filmfest Frankfurt International. From the almost 150 submissions of short and feature films, the Programme Commission currently selects the competition entries.

All further information can be found at: www.lichter-filmfest.de