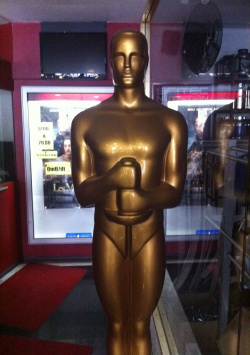 
GRAVITY, 12 YEARS A SLAVE, AMERICAN HUSTLE, CAPTAIN PHILLIPS - who will win this year's "Oscars®"? For the second time, on Sunday, 2 March, the public can enjoy the award ceremony of Hollywood's most important film prize at the German Film Museum. From Friday, 28 February, to Sunday, 2 March, the cinema of the German Film Museum will be showing nominated films from the Best Film category. From Sunday 2 March to Monday 3 March, the house is open all night (from 11 p.m.) - before the live broadcast of the glamorous show starts, a varied programme prepares for the Oscar® night: Oscar® guided tours through the permanent exhibition, for example, invite visitors to explore costume designs, scripts and props from Oscar-winning masterpieces and award-winning filmmakers. The big Oscar® betting game allows players to bet in all 24 categories; the prize is a Lufthansa flight for two to Los Angeles. There is support from the Oscar® expert Michael Kinzer, who presents his forecasts in the "Oscar® Oracle". In the Bluebox on the 4th floor, visitors can have themselves photographed in Oscar-winning films or beam to the side of the stars on the red carpet in Los Angeles. Also available in "Red Carpet Outfit", which rounds off the Glamour Look Academy with professional make-up and Oscar-ready hairstyling. And after the photo, the best thing to do is to have a new look at a cocktail at the Oscar® bar on the ground floor. There DJ Antje-Maya Hirsch (radio x - Music for Films) plays popular film hits and soundtracks, and the film café offers drinks and snacks until the early hours of the morning. Motivated to stay the course from 3 a.m. to the free breakfast buffet of the Steigenberger Frankfurter Hof.

cards at 18,-€ / 15,-€ (reduced) are available from Wednesday, January 29th at the Deutsches Filmmuseum as well as at all known advance booking offices* and online at the ADticket-Shop*. (*plus VVK fees)