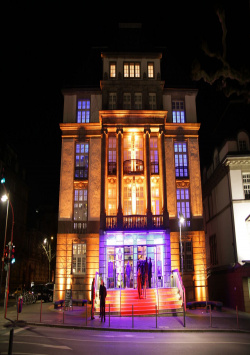 Oscar®-Weekend at the German Film Museum
from Thursday, 25.until Sunday, February 28

A breath of Hollywood in the German Film Museum: Sunday evening, 28. February, the Academy Awards® will be presented in Los Angeles and the red carpet will also be rolled out at Schaumainkai in Frankfurt! Who is "Best Actress in the Leading Role, Who is "Best Actress in the Leading Role of the 2015 Cinema Year, Which is "Best Film? Before the award ceremony (which in Germany only begins late at night due to the time difference) is broadcast live and in HD on several screens throughout the building at 1:30 a.m., visitors can get in the mood for the film event of the year, for example in the permanent exhibition, where Maximilian Schell's Oscar® trophy can be seen.

A Hollywood-ready program shortens the waiting time until the gala begins: Michael Kinzer, a profound connoisseur of the winning mechanisms at the Academy Awards®, dares to take a look at the potential winners of the 2015 cinema year at the Oscar® oracle. At the Oscar® betting game, visitors can prove their oracle qualities themselves. The person with the most correct tips waves a Lufthansa flight for two to L.A.!

Who dreams of a guest role in his or her favourite film can have himself or herself beamed into a film setting in the film studio using bluescreen technology or directly to the stars on the red carpet. The CATWALK make-up artists provide a Hollywood-ready appearance with free professional styling. In the new look, a glass of champagne from PIPER-HEIDSIECK can be enjoyed in style after the photo is taken, while DJ Antje-Maya Hirsch (radio x Music for Films) in the museum foyer and the TV broadcast with film music and soundtracks create a festive atmosphere.

The Filmcafé offers snacks and drinks until the early hours of the morning, tasty themed cocktails and a free breakfast at 3 o'clock will reliably help you to get over any possible approaches of fatigue.

Admission prices incl. advance booking fee via ADticket:
21 Euro / 17.70 Euro reduced*
The online ticket sale at adticket.de starts on Friday,
29 January, at 10 am. The tickets are available then also in the advance booking offices of ADticket.

at the box office are on Sunday, 28 February, from 22:30 clock at remainder tickets available.

*The entrance covers the entire program of 23 2 clock inclusive Specials. Admission to the TV broadcast of the award ceremony is free from 2 a.m. (no seat guarantee).

Thursday, 25. February, 20:15
What's going on in German film?
The winners of the Student Academy Awards 2015
In the series "What's going on in German film? three films are on the programme in February: For the first time, all three prizes went to German filmmakers in the "Student Oscars®, the Student Academy Awards, 2015. With their medium-length films, the young directors prove that current German film can also be successful internationally. Ilker Çatak and Dustin Loose will be guests on Thursday,
25 February and will ring in the big Oscar® weekend at the German Film Museum with their award-winning works.

ALL WILL BE GOOD
Germany/Austria 2014 R: Patrick Vollrath
D: Simon Schwarz, Julia Pointner, Marion Rottenhofer. 30 min. DCP
Winner of the Student Academy Award 2015 in Bronze, nominated for the Oscar® in the category "Short Film (Live Action)
A weekend father picks up his eight-year-old daughter Lea. Little by little the girl creeps up on the feeling that something is wrong this time. A fateful journey begins.

LEDIGATION OF A Matter
Germany 2014. R: Dustin Loose
D: Ludwig Trepte, Robert Hunger-Bühler, Nina Petri. 21 min. DCP
Winner of the Student Academy Award 2015 in Silver
The film is based on a short story by Håkan Nesser: A young man is supposed to meet his father for the first time, who has been in a closed psychiatric ward for almost thirty years because of murder.

SADAKAT Fidelity
Germany/Turkey 2015 R: Ilker Çatak
D: Özer Arslan, Baris Gönenen, Sanem Öge. Twenty-five minutes of DCP. OmU
Winner of the Student Academy Award 2015 in Gold
Istanbul 2014: Asli lives in stable conditions. But the social unrest also reaches them. In a spontaneous action she hides a political activist and helps him to escape arrest. She and her family are targeted by the police.

Oscar®-nominated films
As a countdown to Oscar® Night, the cinema of the German Film Museum shows candidates for the coveted trophy. These are films nominated for the category "Best Film".