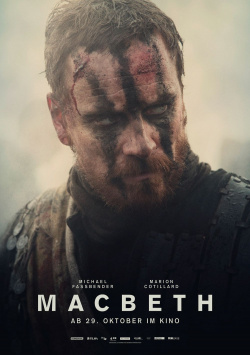 Macbeth - the new trailer is online

Scotland in the Middle Ages. After a victorious battle, the unstoppable rise of the power-hungry commander Macbeth (Michael Fassbender) begins. Seduced by a mysterious prophecy and driven by his ambitious wife (Marion Cotillard), Macbeth murders his king Duncan (David Thewlis) to ascend the throne of Scotland himself. He even has his faithful friend and confidant Banquo (Paddy Considine) eliminated. But the more brutal his reign of terror becomes, the more Macbeth and his wife plague the demons of their guilt. When Duncan's son Malcolm (Jack Reynor) joins forces with Macbeth's greatest adversary Macduff (Sean Harris) and gathers an army against the tyrant, the tale turns.

The Kingslayer and his power-hungry wife: Hardly any work has fascinated for centuries as much as Shakespeare's tragedy of the rise and fall of Macbeth. From the producers of the worldwide hit movie "The King's Speech" comes an opulent and gloomy new film version in which Oscar nominee Michael Fassbender ("X-Men", "Shame") and Oscar winner Marion Cotillard ("The Taste of Rust and Bone", "La vie en rose") reinterpret the probably most famous pair of tyrants in world literature in a breathtaking way. In the other roles some of the most renowned British actors shine: David Thewlis ("Harry Potter" series) as Duncan, Paddy Considine ("Pride") as Banquo, Jack Reynor ("Transformers 4 - Era the Downfall") as Malcolm and Sean Harris ("Prometheus - Dark Signs") as Macbeth's ultimate adversary Macduff. The film is directed by Justin Kurzel, who caused a sensation in 2011 with his film "The Murders of Snowtown" and will make a film about "Assassin's Creed" in 2015.