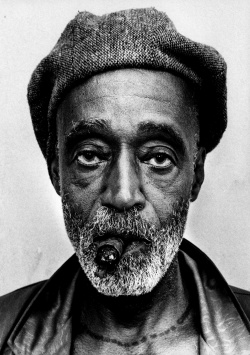 Melvin Van Peebles for the first time in Frankfurt am Main

strong>Blaxploitation films and audience discussions on 22. and August 23

In the USA he is considered one of the most important figures in black cinema, while in Germany his films are hardly known. At the invitation of the non-profit association Filmkollektiv Frankfurt, filmmaker legend Melvin Van Peebles from New York is now coming to Frankfurt am Main for the first time. On 22 and 23 August 2014, Louise Burkart, Felix Fischl and Gary Vanisian will remind the audience of the short but important phase of Blaxploitation films with film screenings and public talks with Van Peebles in the student residence on the Bockenheim campus (Mertonstraße 26-28, 60325 Frankfurt am Main). When the African-American Van Peebles in SWEET SWEETBACK'S BAADASSSSS SONG (1971) radically asserted the self-confidence of the black population, Hollywood felt compelled to better position black filmmakers - in front of and behind the camera. "Until then, we were mostly seen in movies as slaves, waiters or criminals. I made a film that the black audience could identify with," says Van Peebles in retrospect. As a result, numerous US films of the following years contained black protagonists who defended themselves self-confidently against their white oppressors. The aim was above all to get the black cinema audience to pay for films such as the horror parody BLACULA (1972), but some Blaxploitation films such as SHAFT (1971) about the private detective of the same name in New York sometimes processed the life experience of the black population in the big cities. Above all, the popularity of these films made it easier for black directors and actors of the following generations to enter the film business - which is why Spike Lee Van Peebles calls them the 'Godfather of black cinema'. The career of Van Peebles himself had not started in the USA, but in France: "That's why it's important to me that the German audience knows my first feature film", comments Van Peebles on the German premiere of THE STORY OF A 3-DAY PASS (1968). Only after his feature film produced in France about the love affair between a black GI and a white Frenchwoman had been invited to the San Francisco Festival was Van Peebles given the opportunity to write film history in his home country.

Melvin Van Peebles, born 1932 in Chicago, USA, came to the film as an autodidact. His debut film THE STORY OF A 3-DAY PASS (1968), produced in France, opened the door to Hollywood for him, where he enjoyed little artistic freedom. He then produced SWEET SWEETBACK'S BAADASSSSS SONG (1971) on his own initiative, in which he tells of the self-protection of the black population in terms of both content and aesthetics. His independent masterpiece is still regarded today as a milestone in both independent and black cinema. Melvin Van Peebles has realised other film and theatre projects as an author, director and actor and is also active as a musician. In his works he always deals with Afro-American reality and reflects on the interaction between racism and self-assertion.

About the Blaxploitation Film Program

The film selection is dedicated to the beginnings of the Blaxploitation genre, which improved the career opportunities of black filmmakers as well as commercializing the wishes of the black audience. exploited (hence the word combination with exploitation). SWEET SWEETBACK'S BAADASSSSS SONG (1971) is particularly rare to see: Melvin Van Peebles (equally responsible for direction, script, editing and music) plays a black man who commits two murders in self-defence and is driven to a chase by the police. The soundtrack comes from the then still unknown group "Earth, Wind & Fire". SHAFT (1971) is considered the first Blaxploitation film of a Hollywood studio. A black private detective is pressed by police and underworld alike to prevent a racial conflict in Harlem. The title song by Isaac Hayes won an Academy Award and SHAFT was included in the National Film Registry in 2000, the list of films worthy of preservation. BLACULA (1972), in which a black vampire haunts the inhabitants of Los Angeles, stands for self-irony within the Blaxploitation genre.