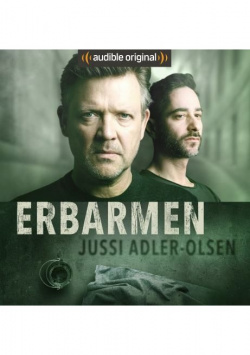 The crime novels by Jussi Adler-Olsen about the Q Special Forces are not only a hit as a book. The previous film adaptations were also a great success with the audience. Now Audible is bringing out the bestseller ERBARMEN as a first-class radio play experience - this is great cinema for the ears! To guarantee this, the leading roles were prominently cast with Justus von Dohnányi, Denis Moschitto and Carolin Kebekus.

The decision to set up such an elaborate radio play production was obvious, as the download of digital radio lessons at audible.de has doubled within the last three years! And as Netflix has proven, it's worth investing in your own high-quality content in order to win over and retain a demanding audience. And this is exactly what Audible wants to offer its listeners: With up-to-date content, top-class authors and directors, first-class speakers as well as qualitatively elaborate implementations, Audible takes the production of original radio plays to a new level and sets a trend in the German audio book industry.

Torsten Surberg, Head of Content Audible Deutschland says: "Radio plays are booming! More and more people are discovering for themselves the possibility of experiencing stories in this form. Great speakers, captivating soundscapes and dramatic music allow the images to be created in the listener's head without having to dictate them down to the last detail as in the film. With this elaborate production and a top line-up with Justus von Dohnányi, Denis Moschitto and Carolin Kebekus, we once again offer our listeners the opportunity to rediscover one of the most popular stories, almost a classic of the genre."

And it is precisely with these ingredients that the adaptation of the thriller "Erbarmen" (Mercy) has resulted in an eleven-hour radio play that offers a particularly extraordinary and exciting listening experience in which the listener literally loses himself. Of course, this is also due to the very special narrative style of Jussi Adler-Olsen. The novelist was awarded the European Crimean Prize in 2015 and is one of the most successful crime novelists of our time. Especially in Germany he is one of the most popular authors of the last years with books sold millions of times and has significantly influenced the genre success of Scandinavian crime novels and thrillers.

The leading roles are spoken by acting and TV stars Justus von Dohnányi, Denis Moschitto, Carolin Kebekus and Matthias Koeberlin in a supporting role. The story is told by one of the most popular audio book speakers in Germany: Erich Räuker. The increasing popularity of radio plays offers actors new, no less exciting possibilities. Focused only on the text, an actor can once again prove his talent in a completely different way than in front of the camera.

That's what Justus von Dohnányi experienced during his work behind the microphone. He is extremely enthusiastic about his role, especially because he only has to bring it to life with his voice: "I like the role of Commissioner Carl Mørck, who despite his rough edges is a likeable guy. It has given me great pleasure to speak this character. There are some differences between working in the studio and acting, but there are also some commonalities: You get just as involved in the role, have to transport emotions and basically act like in front of the camera. The quality of radio play production is now comparable to that of TV series. This constantly growing radio play market makes it possible for radio plays to become more complex in every respect. This is great cinema for the ears!"

>Carolin Kebekus, who was able to work here completely detached from her image as a comedienne, sees it similarly: "I found it very attractive to speak the role of Merete Lynggaard. Merete was the model woman of the Danish Democratic Party - until her kidnapping. She survives 5 years in captivity in a room without a window to the outside world. To convey her physical and mental pain only through my voice was a mad challenge. Merete is an incredibly strong and exciting character who gives me the opportunity to slip into a completely new and unknown role: "

And that's what ERBARMEN:
The distorted voice came from a loudspeaker somewhere in the dark: "Happy birthday, Merete. You've been here 126 days now, and that's our gift: the light will stay on for a year from now on. Unless you know the answer: "Why are we holding you?".

On March 2, 2002, a woman disappears without a trace on the ferry from Rødby to Puttgarden, one suspects death by drowning. Five years later, Inspector Carl Mørck (JUSTUS VON DOHNÁNYI), who has just been "promoted" to Special Department Q, triggers an avalanche with his first case: With the help of his quasi-assistant Assad (DENIS MOSCHITTO), he comes to the conclusion that the politician Merete Lynggaard (CAROLIN KEBEKUS), who had been believed dead for years, may still be alive after all. Its suspicion is confirmed and it begins a nerve-racking race against the time, which robs the listeners of the breath.

The radio play is immediately available with Audible.de as Download.

We give away the radio play 3 times HERE as download