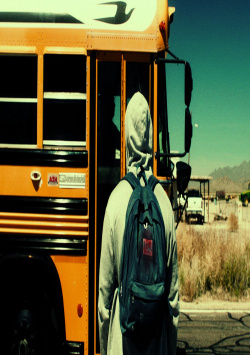 Between Credible Fiction and Illusory Document
Movie Series of Friday, 10.until Tuesday, 21 February

The boundaries between fact and fiction, reality image and staging can no longer be drawn clearly. While the problems of "fake news" and "postfactual distortion of facts" are being discussed in the light of current political and social developments, the transitions in cinema are also becoming increasingly fluid.

The programme series "The Game with Reality", which will be continued in March, addresses this problem area. The tension between two genres, whose access to truth is fundamentally different, is explored: The documentary film is connected with the claim to depict reality. It is filmed at original locations and shows real existing people.

On the other hand, the feature film tells its own story, which creates a fiction and in doing so falls back on a visual language and dramaturgy appropriate to the subject. However, fictionality should not automatically be equated with a loss of documentary credibility. On the other hand, the documentary film can also be understood as a variant of staged reality. Selected films show this reciprocal interpenetration before your eyes. So-called mockumentaries are shown, posed documentaries that give the fictional narratives a coat of factual credibility, and documentaries that only turn out to be feature films at second glance. Stylistically different examples illustrate that the relationship between fact and fiction is not as simple as it seems at first.

Friday, 10th day. February, 18 hrs
Saturday, 11 February, 20:30 hrs
F FOR FAKE F as counterfeit
France/Iran/Germany 1973
R: Orson Welles. D: Oja Kodar, François Reichenbach, Elmyr de Hory
89 Min. 35mm. OF
In Orson Welles' film essay, which is no less innovative than his masterpiece CITIZEN KANE, everything revolves around the question of what is authentic, what is fake and what is the difference between the two. Truth and falsehood, art and forgery Welles' ingenious play of thoughts opens up completely new perspectives on seemingly fixed concepts to the viewer. Through the skilful montage of film clips and fictitious documentaries, he describes the possibility of the media to manipulate individuals and masses, and the impossibility of distinguishing between reality and illusion.

Sunday, February 12, 20:30pm
THE THIN BLUE LINE The Case of Randall Adams
USA 1988 R: Errol Morris
D: Randall Adams, David Harris. 103 min. 35mm. OF
In 1976 the policeman Robert Wood is shot dead in the USA. There are two suspects: a 16-year-old with a criminal record and 28-year-old Randall Adams, who is finally convicted of murder. Thanks to his own research, director Errol Morris finds out that five witnesses testified wrongly in court and the police falsified evidence. In his pioneering work of non-fictional film, he allows the viewer to participate in the same search for knowledge between fact and hypothesis. He structures the factual into an "epistemological thriller that combines investigative journalism with multi-perspective approaches. This results in a network of ambiguity and half-truths.

In the 1920s, a mysterious chameleon confuses the American public: Leonhard Zelig, a man without a self, who assumes the identity of other people. Woody Allen constructs a fictitious personality in the style of a mockumentary. With his tape and archive recordings, he immerses the viewer in a seemingly authentic life that never existed before. While he thematizes the power of manipulation of the medium, Allen makes everyone sarcastically aware of how quickly a personal cult that has arisen can dissolve again or even turn into an image of the enemy.

Thursday, February 16, 20:30
THIS AIN'T CALIFORNIA
Germany 2012. R: Marten Persiel. D: David Nathan. 99 min. DCP
Marten Persiel portrays a clique of teenagers who discovered their love for a sport on the crumbling asphalt of the GDR that did not fit into the programme of the workers' and farmers' state: skating as an expression of subversive strength and pure joie de vivre. The use of private archive films suggests documentary authenticity. Only afterwards it turned out that the punk fairy tale is not a real documentary film at all. But the fact that the film lacks a real existing basis does not diminish the effect at all.

Saturstag, 18. February, 20:30pm
THE IMPOSTER The Blender The Imposter
United Kingdom 2012 R: Bart Layton
D: Frédéric Bourdin, Nancy Fisher, Carey Gibson, Beverly Dollarhide. 99 min. Blu-ray. OmU
USA, 1994: A 13-year-old boy from San Antonio, Texas, disappears without a trace. Three and a half years later, he shows up in Spain: He has the same tattoos, but looks different and speaks with a strange accent. Only when investigators start asking questions does this amazingly true story take an even stranger turn. Suggestion and self-deception create a distorted image of different truths that Layton skilfully uses to create a showpiece of receptor manipulability. Bart Layton's documentary drama is based on the real story of the French con man Frédéric Bourdin.

Sunday, 19th century. February, 20:30pm
I'M STILL HERE
USA 2010 R: Casey Affleck
D: Joaquin Phoenix, Antony Langdon, Carey Perloff. 108 min. DCP. OmU
In 2008, Joaquín Phoenix surprisingly announces his retirement from the film business. He wanted to reinvent himself as a hiphop musician. That he added another chapter to his film repertoire with this experiment remained in the dark for a long time. Hollywood as a human sidetrack? Welcome to the sonata off the beaten track. A bubbling juggernaut, no question. A thoughtful, very slanted piece of fake documentation.

Tuesday, 21st Tuesday. February, 20:30 pm
PUNISHMENT PARK Penalty park
USA 1971 R: Peter Watkins
D: Patrick Boland, Kent Foreman, Carmen Argenziano. 88 min 35mm. OF
In the USA it starts to bubble. In order to avoid revolution, political dissenters are interned in camps. The prisoners have the opportunity to cross the "Punishment Park: an inhospitable desert strip, at the end of which the delinquent is promised amnesty. Much more frightening than Watkins' extremely realistically staged thought game, however, is the fact that many of the former horror visions have long since occurred in this or similar form.

Further information can be found at: www.deutsches-filmmuseum.de