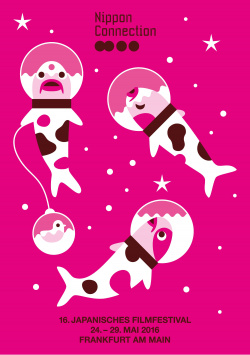 After six days with over 100 films from Japan and a diverse cultural program, the 16th Japanese Film Festival Nippon Connection in Frankfurt am Main ended on May 29. With well over 16,000 visitors, the visitor record of last year was surpassed, and many of the film screenings, concerts and workshops were quickly sold out. This was certainly not least due to the approximately 60 guests. Directors, actors, producers and artists from Japan and all over the world who have come to present their works to the public. The festive conclusion of the festival was the award ceremony on the last festival day in the Künstlerhaus Mousonturm.

This year's Nippon Cinema Award went to Ryuzo and the Seven Henchmen by Takeshi Kitano. The feature film about an old school yakuza ironically deals with Japan's aging society. The director thus returns to his comedic roots. The prize, endowed with 2,000 euros, will be donated for the twelfth time by Bankhaus Metzler from Frankfurt am Main. Gerhard Wiesheu from Bankhaus Metzler presented the prize to the producer Shozo Ichiyama from Office Kitano.

The Nippon Visions Audience Award went to Under the Cherry Tree by Kei Tanaka. The documentary film convinced as a sensitive portrait of older residents of a social building complex. The filmmaker accepted the award personally. The audience award, endowed with 1,000 euros, was donated for the third time by the Japanese Cultural Center Frankfurt.

The winner of the Nippon Visions Jury Award is Takeo Kikuchi. In his impressively played family drama Dear Deer, the young director tells of a broken sibling relationship, thematizing stagnation in small Japanese towns. The jury stressed that the film was particularly impressive due to the light-footed directing and the acting of the female heroine. The three jurors were German filmmaker Gunter Deller, Office Kitano producer and program director at the FILMeX Festival Shozo Ichiyama and film critic Yuka Kimbara. The prize is a subtitle for the next film project - donated by the Japan Visualmedia Translation Academy (JVTA) from Tokyo.

A special mention in the category Nippon Visions was given to two films. The documentary film Under the Cherry Tree by Kei Tanaka was not only voted a favourite by the audience, but was also praised as a great achievement by the jury. The Man Who Was Eaten, a science fiction comedy by 1993-born director Keisuke Kondo, was also highly praised as an original social aire, as juror Gunter Deller said. After the award ceremony, the final film Pieta in the Toilet was shown in the presence of director Daishi Matsunaka.

Nippon Connection will take place next year for the 17th time and the date has already been set: From the 23rd to the 28th. In May 2017, the Künstlerhaus Mousonturm and the Theater Willy Praml in the Naxoshalle will once again become the center for Japanese film culture.