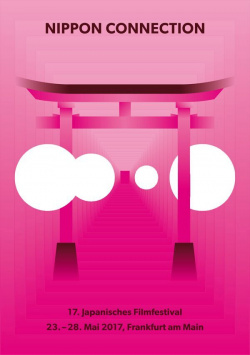 The seventeenth Nippon Connection Film Festival will take place in Frankfurt am Main from 23 to 28 May 2017. With over 100 short and feature films, it is the world's largest festival for Japanese film and offers a varied and exciting insight into Japanese film art. Numerous directors and actors are also on site to present their works to the local public for the first time. In addition to the films, a varied supporting programme offers visitors the opportunity to immerse themselves in Japan's multifaceted culture. The main venues are the Künstlerhaus Mousonturm and the Theater Willy Praml in the Naxoshalle.

This year's festival pays special attention to the genre of documentary film. Among other things, Atsushi Funahashi presents his film Raise your Arms and Twist about the everyday life of Japanese pop idol singers of the group NMB48. The director cleverly combines media and social criticism without exposing the stars and their fans. Based on the conversations with her grandfather, the young American filmmaker Kimi Takesue in 95 and 6 to Go illuminates the story of her Japanese ancestors who emigrated to Hawaii. In Mifune: The Last Samurai, Steven Okazaki is dedicated to the life and work of the legendary actor Toshiro Mifune, who has written film history primarily through his collaboration with Akira Kurosawa.

This year again numerous films will be screened for the first time on German screens. Thus Nippon Honor Award winner Kiyoshi Kurosawa in Daguerrotype skillfully combines love drama with subtle horror. It is also the first work by the famous director to be shot outside Japan. The drama Destruction Babies by 35-year-old film director Tetsuya Mariko, which won an award at the Locarno Film Festival last year, is hard and uncompromising. In his award-winning drama Her Love Boils Bathwater, Ryota Nakano tells the story of the terminally ill Futaba, who in her final days has made it her business to reunite her broken family. In the drama The Long Excuse by Miwa Nishikawa, a lonely writer tries to get his life back under control after a heavy blow of fate. Director Miwa Nishikawa will be personally present at the festival. With his family drama Harmonium, director Koji Fukada shows how the appearance of an old acquaintance turns ordinary family life upside down. Harmonium was awarded the "Jury Prize" at the 2016 Cannes Film Festival in the series "Un Certain Regard".

As a highlight in the Nippon Animation section, Nippon Connection presents in cooperation with Kazé the German premiere of Naoko Yamada's Anime A Silent Voice. Based on the manga of the same name by Yoshitoki Oima, he tells the story of Shoya Ishida, who during his school days harassed and mocked his deaf classmate Shoko Nishimiya. Years later, Shoya, plagued by remorse, sets out in search of Shoko to apologize for his behavior.

In addition to the films, the festival offers a variety of workshops, lectures and exhibitions that invite visitors to get to know Japanese culture. Interested people can take part in a carving workshop to complete kyogen masks or acquire knowledge about vital points in the body and their application in martial arts in the kyusho-jitsu workshop. In cooperation with the Weltlesebühne e.V., translator Ursula Gräfe gives an insight into her daily work. Ursula Gräfe is known above all for her translations of the works of the Japanese star author Haruki Murakami.

The Nippon Kids programme is also very exciting for young viewers. The magical puppet animation film Chieri and Cherry by Makoto Nakamura with German live dubbing will be shown as a children's film. At the Taiko workshop, children can let off steam at the traditional Japanese drums, or they can try their hand at preparing cute sweets at the Panda Dango cooking course. Taruto Fuyama, professor at the Tokyo University of the Arts in Yokohama, shows in his workshop how hand-painted animated films are made.

The Japanese Film Festival Nippon Connection is organized in honorary work by the 70-strong team of the non-profit organization Nippon Connection e.V.. It is under the patronage of Peter Feldmann, Lord Mayor of the City of Frankfurt am Main, and Takeshi Kamiyama, Consul General of Japan in Frankfurt am Main. Festival centres are the Künstlerhaus Mousonturm and the Theater Willy Praml in the Naxoshalle. Other events will take place at Mal Seh’n Kino, Deutsches Filmmuseum, exhibition space Eulengasse and Theater Die Käs.

The complete programme and tickets will be available on the festival website from 29 April 2017: www.NipponConnection.com