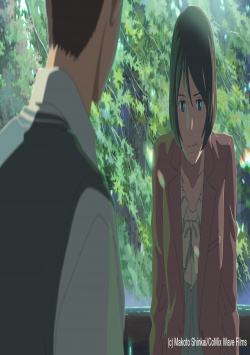 The team of the Japanese film festival Nippon Connection invites you to a relaxed Chill & Grill evening at the KOZ on August 8th starting at 6:00 pm. From 19:30 the enchanting anime The Garden of Words by Makoto Shinkai will be shown (kindly supported by the Japanese Cultural Institute Cologne and the Consulate General of Japan in Frankfurt). In addition there are delicious German-Japanese grill creations. Admission is free!

About the film:
THE GARDEN OF WORDS
(言の葉の庭 / Kotonoha no niwa)
by Makoto Shinkai, Japan 2013, 46 min., Japan. Original version with English UT, FSK 0
It is rainy season in Tokyo. The high school student Takao dreams of becoming a shoemaker and skips school to draw designs in an idyllic Japanese garden. There he meets a mysterious woman who obviously doesn't take her job too seriously either. Never before has rain been so beautiful: a poetic story in breathtakingly animated images.

Make a note of it: The 16th Nippon Connection Film Festival will take place from 24 to 29 May 2016 at Künstlerhaus Mousonturm and Theater Willy Praml in the Naxoshalle in Frankfurt am Main.