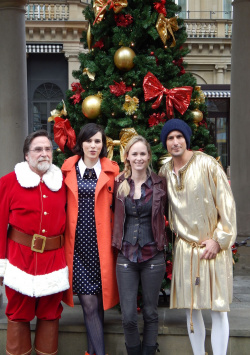 On the set of EVERYTHING IS LOVE

It's only been a few weeks since Frankfurt was illuminated everywhere by Christmas decorations and the Christmas market dominated the cityscape. But the Santa Clauses have long since disappeared from the shop windows, the festive stalls have been dismantled and the smell of gingerbread and mulled wine has given way to the scent of spring. All the more astonished were many Frankfurters, when suddenly the big merry-go-round was set up together with some Christmas market stalls on the Römerberg and people with Christmas hats walked through the scenery. But don't worry: the real Christmas market won't come back until November. What was set up at Römer last week was merely the backdrop for Markus Goller's new film ("Friendship", "Frau Ella"), which is currently being shot in Frankfurt and Berlin and will be shown in our cinemas at the beginning of December.

Based on the Dutch film "Alles is Liefde" from 2007, "Alles ist Liebe" tells the story of five different couples who have to struggle with normal madness during the Christmas season. Kiki (Nora Tschirner) and Jan (Tom Beck), for example, meet again after many years. He used to be her big love, but in the meantime he has not only become a big Hollywood star, but also an even bigger puke. It seems unlikely that the old sparks will start to glow again. The recording director Alice (Inez Bjørg David) is struggling with the mysterious Martin (Elmar Wepper), who carries a big secret with him. Viktor (Friedrich Mücke) and Klaus (Christian Ulmen) are actually a happy couple. The wedding is imminent, but Klaus has great doubts as he comes from a family that is not necessarily a prime example of the durability of love. Clara (Heike Makatsch) and Hannes (Wotan Wilke Möhring) have been on their way to the altar for a long time and are now standing in front of the ruins of their marriage after Hannes has cheated on them. For Simone (Katharina Schüttler) and Kerem (Fahri Yardim), on the other hand, marriage itself is ideal. The couple is happy and has two wonderful children who will soon be followed by a third. Everything went perfectly until Kerem lost his job...

Despite a tight shooting schedule, Nora Tschirner, Tom Beck, Inez Bjørg David, Elmar Wepper and director Markus Goller together with Ueli Steiger (camera), Henning Ferber (producer) and Paul Steinschulte (Universal Pictures International Germany, managing director) took the time to give the press a glimpse of the shooting. In Frankfurt, in addition to the banks of the Main, the Römer and the Alte Oper, the Hotel Frankfurter Hof also served as the backdrop for the film. The press was then invited here to get a brief impression of the shooting of a scene that Kiki alias Nora Tschirner showed in front of the Commerzbank Tower. After some takes of this scene were in the box, the shooting break was used for a small photo session in which the present actors and filmmakers were accompanied by Boris Rhein, the Hessian Minister of Science and Art, Dr. Ursula Vossen of HessenInvestFilm and Katrin Huvart of the Film Commission Hessen. After the photo motifs, there was still time for short statements: While the actors were generally very positive about the shooting in Frankfurt and the relaxed atmosphere among each other and told a little bit about their characters, Minister Boris Rhein emphasized how important it is for a city like Frankfurt to promote films and attract filmmakers to the Main metropolis. In view of the motifs Goller and his team chose for the shooting in Frankfurt, it can be assumed that "Alles ist Liebe" will not only be a beautiful Christmas film, but also an attractive advertisement for Frankfurt.

In how far this will be the case and whether the very nice first impression we were able to make on location will also be noticeable on the cinema screen, you can get an idea of it yourself from 04.12.2014 - because then "Alles ist Liebe" will come to German cinemas! We are curious!